Wait Big Dave, hasn’t the stock market gone higher as of late? Oooh, looks like someone gets to wear the Captain Obvious hat today! Yes it has but you have to also see the forest for the trees by taking a look at the big picture, studying the technicals, and the leadership. Let’s break it down.

It always amazes me that something so simple can tell you so much. Ask yourself, “self, where’s the market today and where was it weeks, months, or years ago?” Well, the Ps are at 2060 round numbers and they were at 2060 around Thanksgiving of 2014. That’s a lot of sideways movement. As a card carrying trend following moron, that’s not a trend you want to follow.

This market reminds me of question on one of my MBA exams:

Q. Why did the hardware store located under the brothel go out of business?

A. Too much f’n overhead!

Okay, bad joke. Hey, you try to make technical analysis funny and entertaining. It's a lot of work. You know how much time I spent looking for the perfect turkey and whorehouse images this morning? (note to self: that's going to be a tough browser history to explain) Seriously, never forget that the price bars aren’t just squiggles. There are people behind the bars. And, likely there are a lot of people who are looking to “get off the hook.” The Johnny-come-latelies are the worst. These are the investors who watched in anguish as the market just went up (as their salesman, I mean “financial advisor,” promised it always does-don’t get me started) for 6 years and then finally decided to throw in the towel and buy. Unfortunately, they’ll also be the first to throw in the towel and sell, looking to get out at a scratch.

3. “V” Shaped Recoveries At High Levels Are Hard To Sustain

It’s hard for a market to run a race right after it has ran a race. When a market sells off from high levels and then has a sharp “V” shaped recovery, it’s difficult for a market to sustain that up move. By the time it gets all the way back to new highs, it’s running on fumes. I fleshed this out in a lot more detail, comparing them to low level “V” shaped recoveries in Thursday’s Dave Landry’s The Week In Charts. I also got into a little trading psychology and money & position management. Check it out:

4. I’m Not Sure About The Leadership 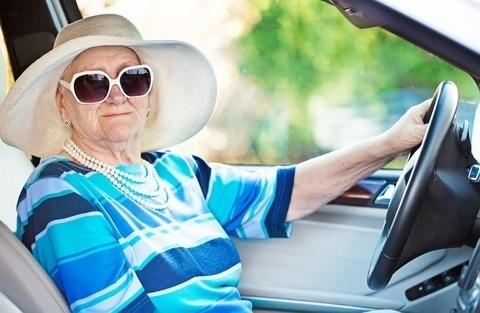 You always need to ask yourself, who’s driving this market? The makeup of the leadership is telling. Right now we have Food and Toilet Paper (Consumer Non-durables) leading the way. Even in bear markets, people still eat, and, well, you know. The point is that these are so called “defensive” sectors. Interest rate sensitive areas such as Utilities and Real Estate are also making the new high list. Commodities--Energies and Metals & Mining have made a sharp turn from lows and have been incredibly strong on both an absolute and relative strength basis. 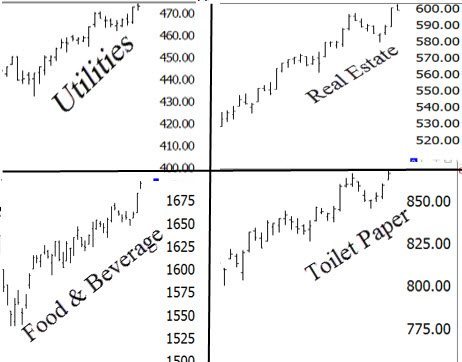 I guess my point is that I’m just not convinced that you can run a bull market on commodities and defensive issues.

We still have a major Bowtie sell signal on the weekly chart going all the way back to last summer. This signal remains in place until/unless the old highs are taken out (a). This doesn’t mean that you should short with both fist and not honor your stops if you already did. It does mean that you should pay attention since the last couple of times this has happened the market was halved. 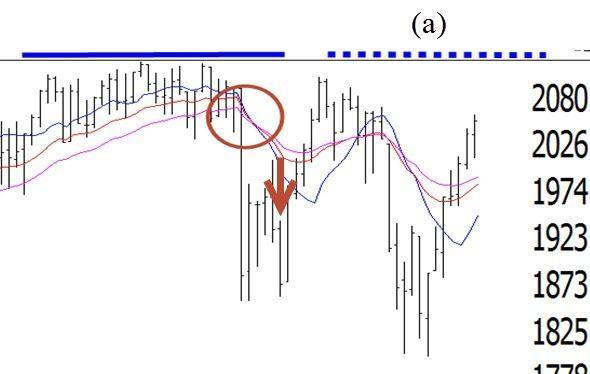 So You’re Not Buying It Big Dave?

I didn’t say that. We are actually long more stocks than we are short. Below is the actual model portfolio.

Keep in mind that unless the market is in a rip roaring trend, predicting the direction of the overall market is tough. It’s much easier to predict the direction of individual stocks. And, that’s what we do. We listen to the database. Yes, you have to have a framework as outlined above: What’s driving this market? Can overbought become even more overbought? etc… The bottom line is that through following the process we let the database tell us what to do.

Once we do think we have something worthwhile, entries will put us into the trade if we’re right, at least initially. Stops will take us out of we are wrong. Taking partial profits will reward us if we are right short-term. And, trailing stops will keep us in the mother-of-all trends. Again, all of this is a process.

The point is that I’m not necessarily fighting it. I’m being prudent not obstinate. Based on the aforementioned reasons, now’s not the time to throw darts. Although I always preach being picky with your stock picking, now’s the time to be super picky. I should do a course on that, wait, I did!

​I watched the stock selection course again last weekend. It's amazing how it seems so "basic" the first time I watched it long ago but now after looking at lots and lots of charts and re-watching the course several times I see the genius of the methods. Great course!!

Check It Out
Matt Slater

The process has us with one leftover short. And, it has put us in some of the aforementioned commodities and nothing else. The great thing about these areas is that they can trade independently of the indices.

I hope the market does go on to make new highs and stays there. I know, in this business you hope in one hand and… The point is that you can’t worry about being right. Trust me, you’ll be wrong a lot. That goes for you, me, and the guy who screams on TV. Being wrong is okay. Staying wrong is a sin. We're not selling the farm. It just looks like this market has it work cut for it.

Stick to the process. As I preach, listen to the database. Right now it’s not producing a lot of setups. It is saying to let things shake out a bit. That’s fine with me. Years ago I craved action and felt like I had to do something—all day, every day. Now I’m just the opposite. I know now that in the end, the patient will win. Let everyone else fight it out. As Livermore said, those players are laying the groundwork for you next venture. If you do feel the urge to buy with both fist, just consider the aforementioned 5 things.

​May the trend be with you!