Now With Dave Landry: Living And Trading Through COVID – Dave Landry on Trading

Now With Dave Landry: Living And Trading Through COVID

I'm fielding a few “where is big Dave?” emails. Big Dave is still big Dave but not quite as big. Big Dave had COVID and shed 25 pounds.

I've kept up with my trading service and popped in and out of my Facebook group, but I haven't had enough energy to do much else lately. Although Nietzsche says something about not being destroyed makes you stronger, for me, it was more of a Norm McDonald: “What doesn't destroy you makes you very, very, very weak.”

I had nearly every symptom advertised: diarrhea, sweats, sweats, sweats, sweats, and more sweats, SUPER dull headache, fever, chills, aches, and did I mention sweats? I had to get up several times a night and sleep on towels. It did weird things, like attack my weaknesses. My wrists, which annoy me due to repetitive use injury, really hurt. It's like the virus attacked them. Between the pain in my wrists, headaches, and many other "features," sleep was not easy to come by.

I kept my sense of taste and smell (My wife Marcy, who contracted COVID first, completely lost hers). In fact, it was quite the opposite-I became super sensitive. A dog fart would have me running for the porch gagging-providing a little much-needed comic relief to my caregiver, Marcy.  Many foods tasted really bad. Marcy and I were watching a show about Italy, and I thought it would be great if she would defrost some of her famous meatballs.  I was very disappointed when the meatball tasted like it was rancid. Marcy was super accommodating and getting me any food that she thought I might be able to eat. She got me a Greek salad from my favorite local Greek restaurant and it was pretty good! However, the calamata olive nearly sent me over the edge. Side note, a few days later, Marcy tried sushi-big mistake!

A Turn For The Worse

Nearly ten days in, I wasn't getting any better. My oxygen levels were low, I was sweating like a pig, and generally not showing any signs of improvement. My GP, a doctor client of mine who was in touch with an immunologist on my case, and my sister (RN), all said that it was time to "get your arse to the ER."

One of the "murses" in the ER had just recovered from a really bad case. He began "jaw jacking" with me, complaining that I ruined their bed with my sweat. He also told me that I better start moving my arse. Walk to the mailbox, stand up, do anything-but lay around because you won't get any better if you don't do something. He told me that I still had a fight ahead of me and I better not take it lying down!

They put me through a barrage of test and hooked me up to the most expensive machine in the hospital-you know the one that goes "bing." Fortunately, my chest X-ray was clear, so pneumonia was ruled out. I just had to keep fighting. They gave me some antibiotics, an IV, and sent me on my way. A little tough love and fluids probably saved me.

I was lucky in that my GP treated it very aggressively. He had seen success with Ivermectin-an anti-parasitic drug that I had to agree to use for experimental purposes (right to try?). FWIW, I'm pleased to announce that I have no worms! He also gave me steroids and an inhaler. Patient number two from the COVID chain was not so lucky. He was sick as a dog and his doctor did absolutely nothing. I felt blessed. At least they were fighting it! I was encouraged to see Marcy come back to life after her first dose of the wormer. On her second dose, two days later, she seemed to be back to the land of the living. It didn't seem to do much for me, but I do wonder if it lessened the severity. 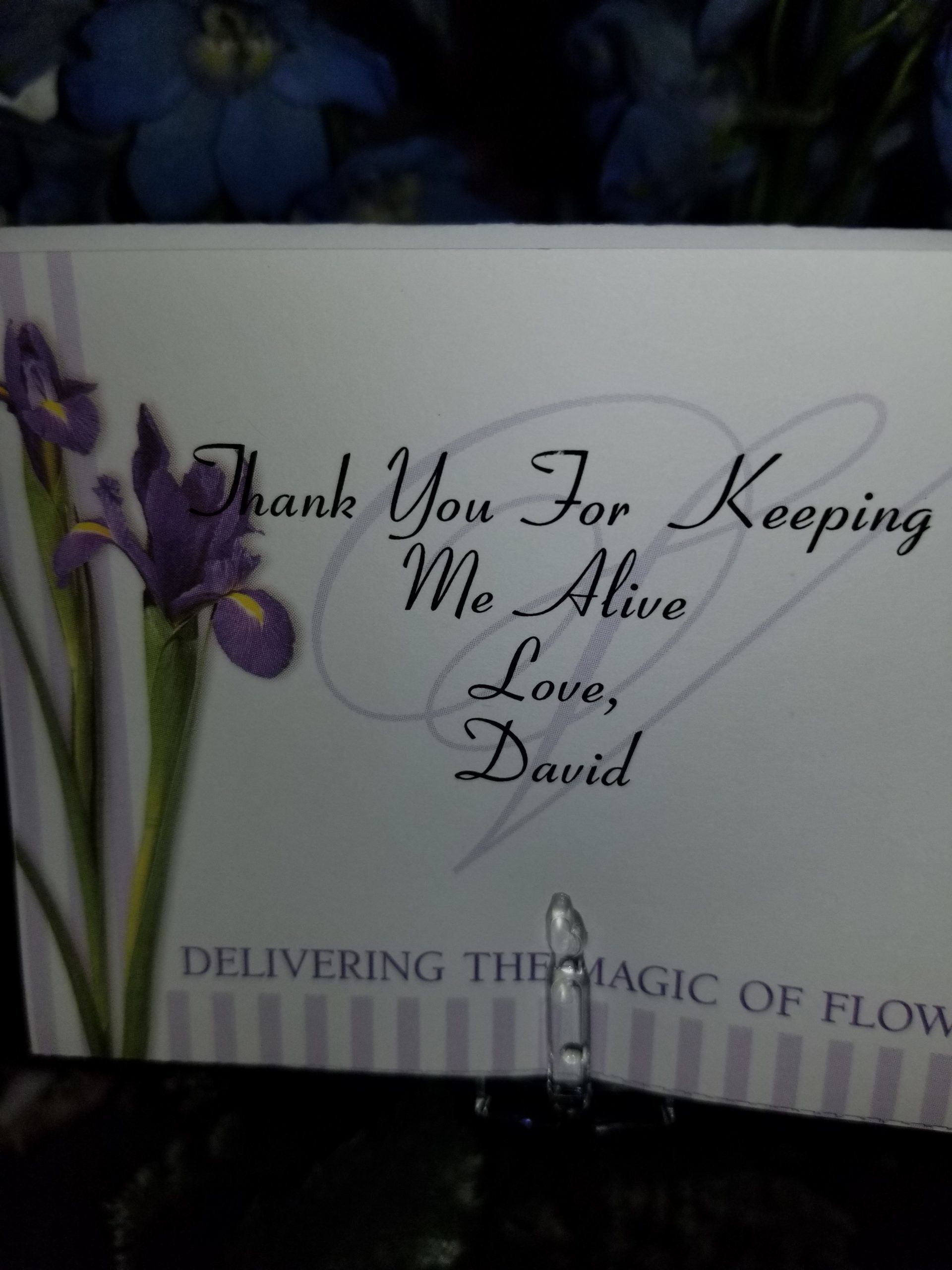 Marcy kept me alive-literally. When I felt like giving up and just lying down as my oxygen levels dropped, she gave me in her best "Moonstruck" Cher voice “Snap out of it!" She'd make me get up, march in place, temporarily kick me out of the house-anything to ge me to move.

Here's What I Learned

Without getting all political, I can tell you with 100% certainty that this thing was manufactured. I can also tell you after such a horrible experience, I will be first in line for the vaccine. I wouldn't wish this on my worst enemy (well, I can think of maybe one person, I'm half kidding!). Having survived and not sure that I was, I'm going to shout it from the rooftops: get the vaccine!

The reason they shove the Q-tip up into your brain for the test is because that's where the virus enters-it goes through your brain first. At first I had some symptoms (tired, sweats, dull headache,) but was still able to function. I'm a person who can't sit still. I always have to be doing something. The strange thing is that before I became really sick, my motivation went to zero. All I wanted to do was look at charts, trade, and absolutely nothing else. My apathy skyrocketed. I couldn't give two sh*ts about anything, even if I tried. I've never felt so numb in my life.

It Was A Super Power-For A While

The not caring was actually a bit of a superpower for me with trading. I had achieved the "flippant status" I often dream about-being able to take trades with zero remorse. I saw stocks on the Landry List set up for intraday trades-which were backed by longer term trends and due to revert to the mean. I knew that I was sick, so I was careful to trade small (less than 1/2% per trade) and immediately would put in a limit for profits and a trailing stop just in case the mother-of-all intra-day trends ensued. I didn't obsess over the positions. I just let them do their thing. Unfortunately, as my condition worsened, I wasn't able to continue to play. I'd check in here and there and then head back for the couch. To do my nightly analysis, I had to sleep a couple of hours first.

I'd love to know what I would have done with GMA on the big pop. Although it's risky behavior, I'm fairly confident that I would have been tempted to buy a few 100 shares and see how long I could ride it intra-day with a trailing stop. As I was feeling better, I felt like I needed a story for the stock for the next cocktail party-knowing that that would be the first thing people asked when they saw me. I didn't want my answer to be "oh, I was sick and I missed it." Finally, last Thursday, I couldn't stand it and posted in the Facebook group that I wish I could short it-"they" had changed the rules (or there just weren't shares?). At that point, I realized I could buy deep in the money puts. I took a small position and rode them for about 20 points. Of course, if I were more patient and less skittish I could have ridden them for about 50 points. I can't look at gift horse in the mouth, I made some money in a stock that's going to be the talk of the cocktail parties, so I thank the market gods!

A New Lease On Life

So, now you know where I've been. I heard of people who get cancer, survive, and then say that it was the best thing that ever happened to them. I don't know if I'm that philosophical. I wish that I never had it. It has given me a new lease on life, though. First, I no longer sweat the small sh*t. Second, partially because I'm still tired, I pick and choose where I go and what I do. "I don't feel like going" is an acceptable response. Third, and probably the most important, I am going to do things that I wanted to do for years. I'm going to build the mother-of-all trading desks and get my office studio where I want it. I'm going to bite the bullet and make the backyard I've dreamed up-something that we didn't get around to doing when we built our house. I am also doing a lot of minor, but important things. For instance, although I have traded the major cryptocurrencies, for years, I finally decided to figure out the so-called "shytcoins." I'll have a lot more to say about this over time. For now, I can tell you that many are making huge runs. I've been placing small bets and flipping them out as soon as possible. It's been a blast!

I'm alive. And, it's good to be alive! I won't take any day for granted!

May the trend be with you (and COVID nowhere near you)!