No Apologies – Dave Landry on Trading 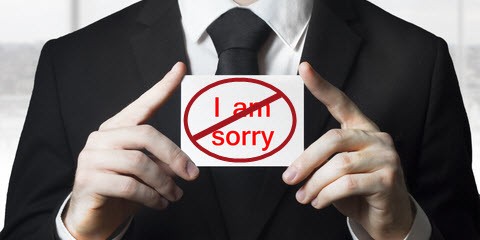 “A mistake repeated more than once is a decision.”
Paulo Coelho

I came across that quote last Wednesday (thanks Babe!) and it became fodder for Thursday’s Week In Charts. I didn’t intend on going into a rant but I did-imagine that. Many times people make mistakes trading and they know that they are making them. The definition of insanity is doing the same thing over and over and expecting a different outcome. Yet, this is exactly what people are doing. They trade in less-than-ideal conditions, possibly seeking action. They don’t honor their stops, hoping a market will come back. They cut their profits short based on their need to be right or out of fear of losing. My rant was based on the people who have emailed me for 5, 10, and even 15 years to tell me what they are doing wrong yet they continue to do the same things anyway. As Tony Robbins says, “If you do what you’ve always done you’ll always get what you’ve always gotten.”

After getting some “feedback” from some of these aforementioned people, I wondered if I was a little too harsh. I re-watched the video and will not apologize. What I said stands. I have done these people a disservice. Tough love is what they really needed. And, I should have given them this tough love 5, 10, and even 15 years ago. Here is the video:

Do I suck or do you suck? I once was at a concert with the worst band on the planet. I stood watching the venue’s sound guy as he twisted mixing knobs in futility. He jerked his headphones off and shouted “WHAT?” (with TF implied). I said, “With these guys, how do I know if you suck or they suck?” For a second I thought he was going to climb out of booth and open up a can of whipass on me but luckily I defused him with a big smile. Hey shouted “THEY SUCK”, pointing at the bad. We both laughed and joked about the crappiest band in Crap Town.

My point—yes, believe it or not I do have one—is that if you do what I preach and you still aren’t successful then maybe it is me that sucks and not you.

Jessie Livermore made the point that we all make mistakes. And, if you didn’t make one mistake you’d own the world in a month. Mistakes are inevitable but you have to learn from them. Do the right thing. As promised in last week’s chart show, here’s the article that I wrote for TRADER’S about just that.

Hey Big Dave, what about the markets?

Oh yeah, it’s getting really mixed. Let’s start by looking at the scoreboard.

The Ps(S&P 500) ended up around 1/3%. Not much to write home about here. They remain stuck in a sideways range that goes all the way back to last Thanksgiving.

The Quack (Nasdaq) ended flat. Net net, it hasn’t made much progress in over 2 ½ months. The good news is that so far, the top of its prior trading range, circa 4800, continues to hold.

The Rusty (IWM) ended higher but well off its best levels. The good news is that it remains just a percent and change away from all-time highs.

With the indices mostly sideways, as you would expect, so are many sectors.

Previously strong areas such as Drugs and Biotech are starting to look a little dubious.

Quite a few areas such as Computer Hardware are sitting on the bottom of their trading ranges. Hopefully—oops, did I say hope?—they won’t jump.

And, many other areas as you would expect are just treading water like the indices themselves.

There is some good news out there-and no, it’s not about me switching my car insurance. Energies appear to be in the process of putting in a bottom. I’m seeing a few setups here. Again, I’m not a value guy but one does have to wonder if these stocks have been beaten up enough.

Next up in the bottoming department is Metals & Mining. They too appear to be in the process of putting in a bottom. Notice that I used the word “process.” Make sure that you wait for setups and then entries here. And of course, honor your stops once triggered.

So what do we do? Well, as mentioned in the aforementioned Chart Show, continue to follow your plan. This is good advice in good markets and especially good advice in bad or questionable markets. This means picking the best stocks to begin with, waiting for entries, and honoring your stops once triggered. It also means taking partial profits if blessed with a profit and then trailing your stops higher. It’s human nature to want to take evasive action when faced with peril, yet following the original plan is your best bet.