My Way Or Highway – Dave Landry on Trading

My Way Or Highway 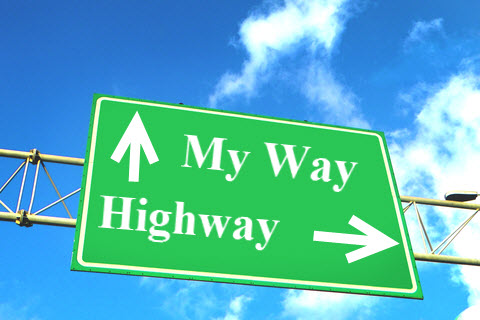 It’s not my way or the highway but I do feel very passionately about certain things. You must position yourself to limit losses while still having the potential for unlimited gains. Sooner or later, regardless of your trading style, something bad will happen. That’s one of the few things that I can guarantee. The good news is, if you catch a few big winners here and there, at least it will be a lot easier to stomach. Yes, it will still suck but at least you’ll live to fight another day.

You don’t know if a potential position will work or not so you use a stop. And, if it does begin working you don’t know how long it will work. In The Layman’s Guide To Trading Stocks I wrote that predicting the markets is like predicting the weather, only short-term forecasts are viable. The future is uncertain. Or, as I often say, all predictions are about the future and a lot of “stuff” can happen between now and then. Therefore, you must take partial profits when offered. You then leave on the remainder of the position and stick with it via a trailing stop just in case the longer-term trend continues. One or two big winners can make all the difference in the world. This can take you from a flat to mediocre year to a great year.

So, When Will The Next Big Winners Come Along?

In a recent Week In Charts, someone poised the question how do you know when/if the next big winners will show up?” The answer is, you don’t. Somehow, they always seem to come along just in time. “Just in time” often feels like an eternity. There’s certainly some anxiety of dealing with the unknown. You have to be patient and only trade when true opportunities present themselves. As Jimmy Rogers said in Market Wizards, “You wait until you see money lying on the floor in the corner and then you walk over and pick it up.” Well, it’s not quite that easy but if you keep that in mind your life does get a lot easier.

Mental Gymnastics: Do Them Before, Not Afterwards

Ask yourself: Self, is this setup really that great? Is a trend emerging? Or persisting? Is it accelerating? If only there were a course on stock selection and that course was on sale now. Sorry, did I digress? Could I live with myself if I didn’t take the trade? What if it took off without me? Could I live with that? If you feel that you can’t, then you should take it but before you do, continue to question things. Is there anything better? What’s the overall market doing? The sector? What are the other stocks in the sector doing? Does the stock have any sexy sisters or brothers that might be even better? Do all these mental gymnastics long before you take the actual trade. As I preach, obsess before you get into a trade, not afterwards.

The Ps sold off a bit, losing just under ½%. This isn’t that big of deal but it does have them stalling at their prior highs. The obviously keeps them stuck in a sideways range.

The Quack ended off just under ¼%. So far, the breakout remains intact. Ideally, I’d like to see it clear its prior highs more decisively before it pulls back too much.

The Rusty (IWM) remains the fly in the ointment. It lost ½% on Tuesday. This isn’t the end of the world but it does have it stalling well short of its old highs/selling off out of its recent retrace.

Drugs and Biotech have pulled back a bit but so far, their nice breakout remains intact.

Financials probed new highs but ended in the minus column.

Speaking of new highs, a lot of areas, like the overall market, are hanging around their prior highs.

Once again, all isn’t great in the world though. Chemicals, the Semis, Computer Hardware, the Trannies, and Durables are still looking dubious. Add in Defense, Automotive, and Manufacturing to that mix.

Utilities look like they are on their way to probe their old lows.
Speaking of old lows, the Energies remain right at their multi-year lows.

Metals & Mining bounced a bit but their meltdown remains intact. This is why you should never try to catch a falling knife.

On a net net basis, Bonds are pretty much were they were over 2-months ago. This is a good thing. As I have been saying ad nauseam, it’s not the absolute level of rates that spooks the markets but rather the delta. The fear of higher rates is much worse than higher rates in and of themselves.

Overall, it’s a bit of a tale of two markets. You have the Quack and selected sectors doing quite well while the rest of the market lags.

As usual, take things one day at a time. The action in the Quack and selected sectors is very encouraging. The mixed nature of the rest of the market not so much. I think this is one of those markets where you could argue a strong case regardless of how you feel. It’s times like these that I just continue to err on the side of the longer-term uptrend. I might not look like a genius if the market tops but that’s the way to bet until it does. Again, just make sure you that pick the best and leave the rest. And, once you do think you have a viable setup, wait for an entry, put in a stop, take partial profits as offered and then trail that stop higher. See my last column for more on this (hit “next page” below).