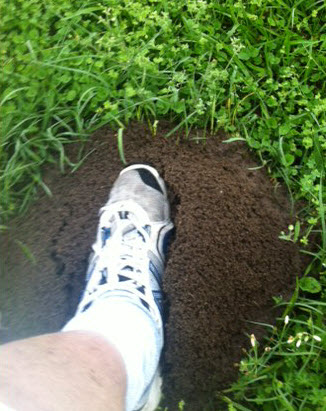 There’s more than one way to skin a cat. You can make a little on most every trade and be highly accurate. Logically, this makes a lot of sense. Like ants building a mound, bit by bit it grows until it reaches a point where it becomes significant. Many of these so called “income producing” strategies are highly touted. What they fail to disclose is that one big foot print will wipe out months, if not years of gains. And, if you’re not totally wiped out, the slow process of rebuilding can begin—provided of course, the psychological damage isn’t too much. I’ve done a little bit of everything over the past 20-something years. Believe me, if there was a way to sit back and watch a money machine run, I’d be doing that instead of grinding it out every day.

As I preach, it is not my way or the highway. To each his own. That’s what makes a market. There’s nothing wrong with any strategy as long as you fully understand the nuances. So, why am I on this ant rant? Well, in yesterday’s chart show I talked about how gains should never be enough. You have to position yourself so that you have limited losses and potentially unlimited gains—and not vice versa.

There will be losses. I preach this often, probably too often. I could make a lot more money in my educational business if I swept this fact under the rug. Anyway, as long as you can control them and catch the occasional big winner, you will be successful. You have to ride your winners and cut your losses short. I know it’s cliché but many people do just the opposite. To quote an old commodity floor adage they: “eat like a bird and defecate like an elephant.”

I focus a lot on the psychological problems associated with trading losses. One thing that I often neglect is that “good problems” can also create psychological issues. Now, before I let freshman psychologically rear its ugly head, just know that many can’t let profits run. They feel like they must lock in a gain quickly based on fear from recent losses. They also might mentally monetize the gains, equating the dollars to material items. This pressure causes them to exit perfectly good stocks prematurely.

Again, it’s never enough. Because there will be losses (sheez, there I go again!), you have to make as much money as possible on any given trade. We have an open trade that was up 80% going into Thursday. That seems like enough, right? Well, as of yesterday’s close it is now up 95%. Of course there’s no guarantee that it will keep going up but you’ll never know how much you can make unless you continue to follow the plan. And, yes, part of that plan is being willing to give up some of those gains on what hopefully (I know, I said “hope”) will only be healthy corrections along the way.

Let’s see how things shake out. Maybe a year from now I’ll look back to this column and point out the 1000% gain I would have missed if I would have taken profits at 80%. And, if it doesn’t, barring the end of the world, I’ll still get stopped out with a better-than-a-poke-in-the-eye gain. I’ll then should NEXT!
Hey Big Dave, what stock is it? Watch Dave Landry’s The Week In Charts to find out:

Speaking of which, there was a glitch. Instead of 100s in attendance there was barely a dozen. I knew I shouldn’t have eaten that garlic before the webinar. Anyway, apparently, there was a problem with the sign up. I’m working to remedy the problem. Thanks for your patience. Also, BTW/FYI, there is no show next week (04/16/15) due to this pesky world tour thing.

Hey, Big Dave, what about the markets?

The Ps (S&P 500) had an okay day, tacking on nearly ½%. The good news is that they are only a percent and change away from all-time highs. The bad news is that they remain stuck in a sideways range—just about where they were last Thanksgiving.

The Quack (Nasdaq) put in a similar performance. It too not too far from new highs—15 year highs in this case.

The Rusty (IWM) scores as a bummer. Although it was off of its worst levels, it still ended off around 1/3% on the day. It’s less than ¾% away from all-time highs but you still have to get there. Net net, like the other indices it hasn’t made much forward progress in a while.

As you would imagine, with a negative Rusty things were mixed internally.

Some areas like the Drugs and Semis are trying to claw their way back to their old highs. I’d feel much better once they—and the entire market for that matter-did.

The Energies still appear to be putting in a bottom. I still believe that we could see some significant moves higher here.

Without boring you too much—too late?—in general, again the market was mixed.

So what do we do? I’m seeing setups on both sides but I think the general plan is to continue to focus mostly on the long side. Since things are a little mixed, now more than ever you need to make sure that you are in the best stocks to begin with. I often preach about defense (e.g. stops) but never forget that your best offense can be a good defense. This also makes it much easier to follow your plan. Pick the best and leave the rest.

P.S. Thanks for all of your patience while we are going through these growing pains. I think when the dust settles, the entire experience is going to be much better.