How To Win A Trading Contest Or Die Trying (Hint: It Helps To Have Dave Landry Or Larry Williams As Your Father) – Dave Landry on Trading

How To Win A Trading Contest Or Die Trying (Hint: It Helps To Have Dave Landry Or Larry Williams As Your Father) 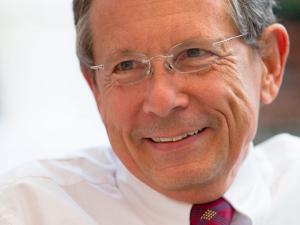 In 1987, Larry Williams burst upon the trading scene by winning a trading contest, turning $10,000 into over 1-million dollars. 10-years later, his daughter won the same competition. There are things that you can do to win competitions but should you do them all the time?

Larry Williams’ amazing story is not my story to tell but there is a lot to be learned from it. Trading longer-term and winning a trading competition are two different things. One’s a marathon and one’s a sprint. To win a competition you must make the most amount of money in the least amount of time. So why shouldn’t we always strive to do this? Well, to make inordinate returns over a short period of time you must use excessive leverage which means taking on an inordinate amount of risk. At one point near the end of the competition, Larry was up over 2 million dollars. As Larry said, according to his wife, (and I paraphrase) that was the year when “he lost a million dollars.” We’ll come back to this. First, some amusing anecdotes….

Learning To Trade In Less Than 5 Minutes?

A friend of my wife’s son, Andrew, was failing the stock picking part of his finance class. His mother told him, “You know, Mr. Dave knows something about stocks.” When I learned of this I was jazzed. My plan was to carve out 3-4 hours of my day to give him a crash course. I also fantasied about coaching him through the contest day-by-day to annihilate the competition.

I didn’t feel that we could crush everyone because I’m all that and a bag of crisps but because I know how human nature works, especially for the novice. The novice stock picker buys the familiar which feels comfortable and looks for bargains, trying to catch the falling knife.

When the day came, I waited and waited but no Andrew. A few hours later he finally showed up. I took a look at his portfolio and sure enough, it was filled with the familiar-the e.g. the “Wall Marts” (Home Depot, Lowes, etc…) and of course, the obligatory Apple. I then showed him my model portfolio which included a bunch of stocks unfamiliar to him with the exception of Game Stop (GME). His face lit up and he said, “Can I buy that?” No, we’re short and it’s going down-that’s what we want to happen. Anyway, I begin teaching and preaching the merits of technical analysis with obviously an emphasis on my methodology. Andrew looked at his watch. Surely he wasn’t bored, especially with Big Dave’s enthusiasm. I paused and gave him a puzzled (wtf implied) look. He said, look, I’m in between classes and only have like 10 minutes.

It turns out Andrew really wasn’t interested in becoming the next Larry Williams. He wasn’t even interested in decimating the competition. He just wanted get the class out the way so he would be one step closer to applying for film school.

Well, so much for my Trading Simplified ™ teachings. I said, okay Andrew, do this: sell everything in your portfolio, then, only buy a stock if it is making a new high until your portfolio is filled. He said, okay but the teacher sometimes makes us “trade.” No worries, only sell positions that are at a loss and if all are profitable, then sell the smallest gainer. The rest of the time was spent getting his charts up and running with a new high scan. 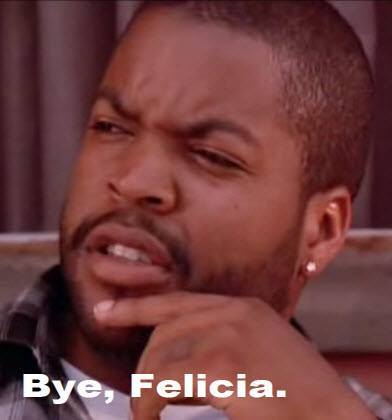 He went from last in class and was in the top three towards the end of the competition. I tried to get some details about the final rankings but his only reply was that he got an A in the course. He’s “bye Felicia,” at least when it comes to me and stock trading.

Fast forward a couple of years and I learn that my daughter wasn’t doing so well in her stock picking project. She got around to informing me a couple of weeks into the competition. She said that she wanted to “kick everybody’s butt.” I looked at her portfolio and sure enough, like Andrew, she was in the “Wall Marts” and of course, the obligatory Apple. Fortunately, she was only buying 1 share per “trade” and was only down around 5%, from $10,000 to around $9,500 when I took over, I mean began helping. I, I mean we, sold all of the existing stocks and started buying stocks making new highs with the exception of one stock. I, I mean she, also bought a stock that was on my Core Trading Service so she must have been following along. Below is the portfolio. Those highlighted in blue were the original positions, those in white are the “new improved” trades, and the one that’s grey was closed out at small loss to make room for new positions. The mark-to-market is based on the closing prices at the end of competition (04/22/16). The raw screenshots were shown in Thursday’s (05/13/16) Dave Landry’s The Week In Charts (scroll down). 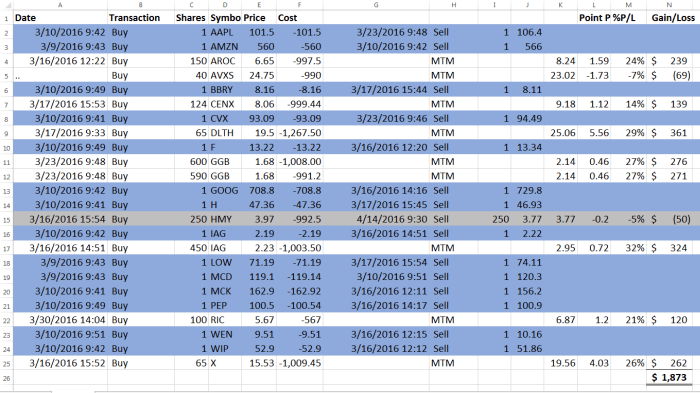 Based on where to she was when she sought professional help to where she finished, she returned around 25%. Not too shabby! Annualized that’s ridiculous! Yes, I know, you can’t assume “permanent income hypothesis” but it’s fun to project it out. And, what would be without hypothetical statements?

Below are the charts. See the Week In Charts for bigger versions and more details. 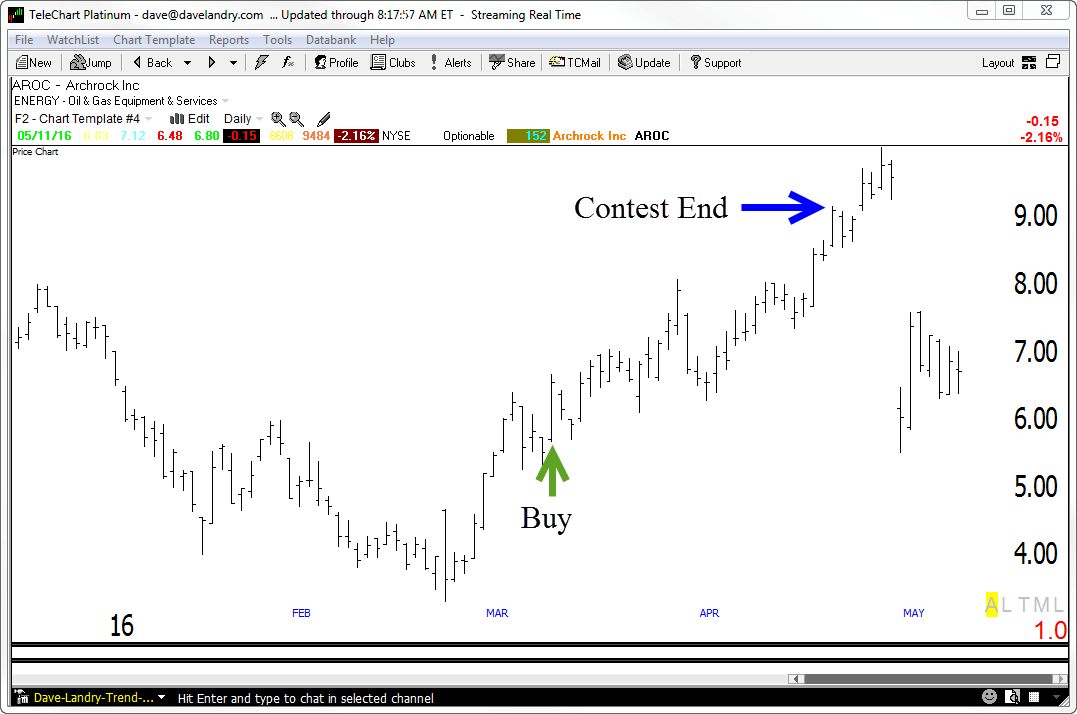 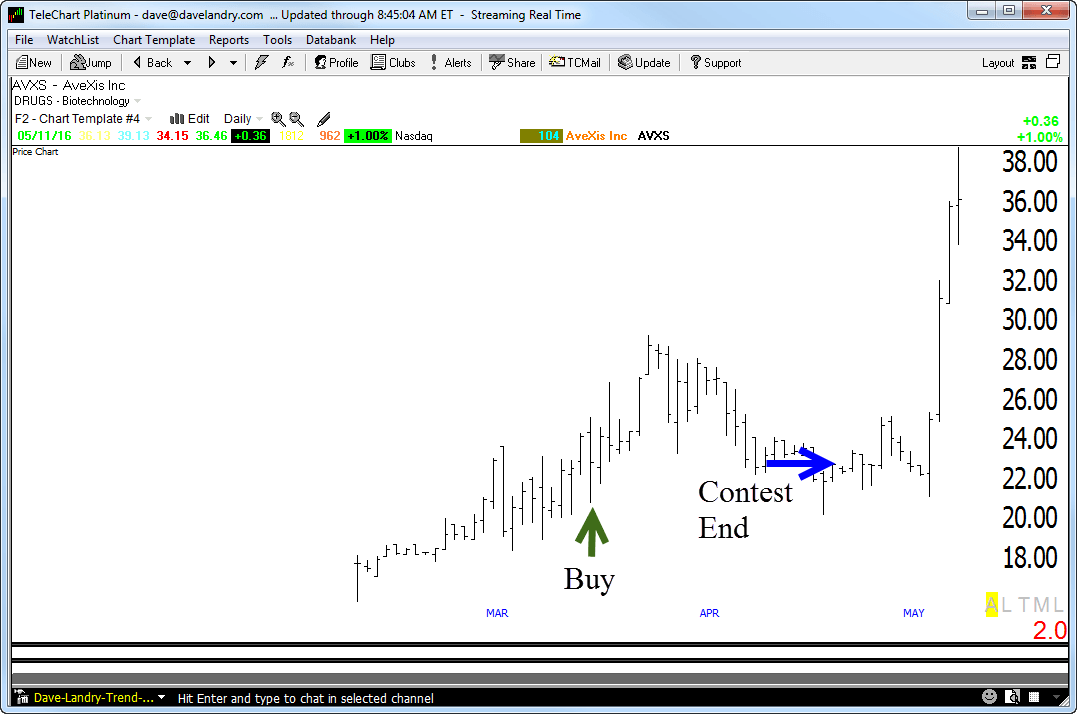 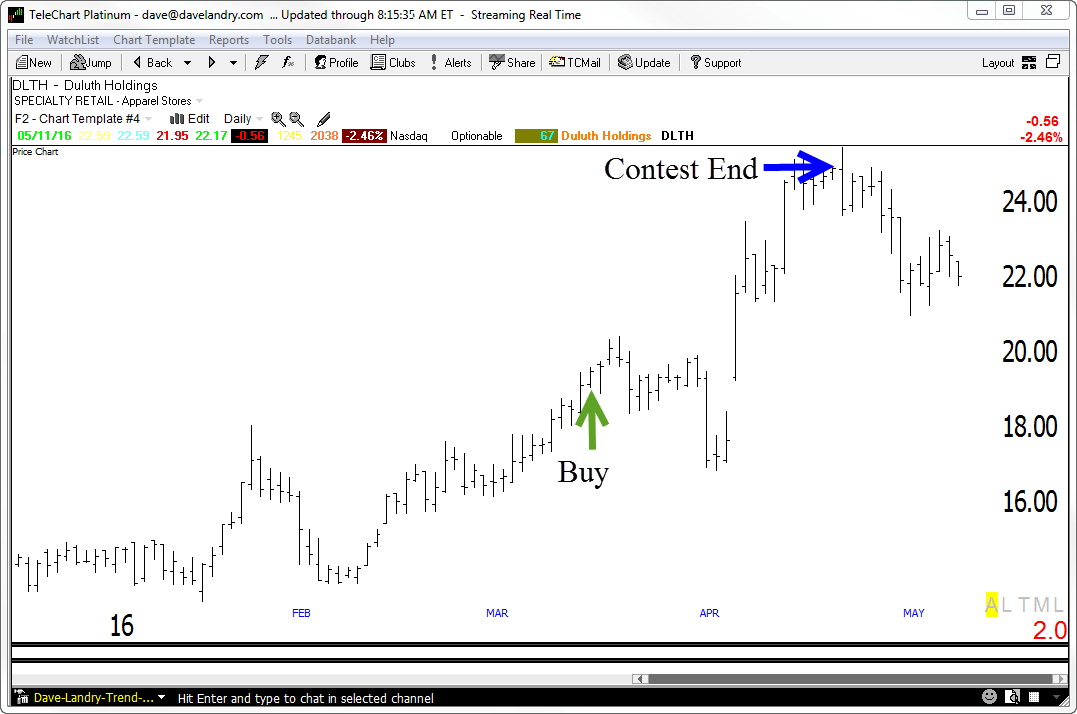 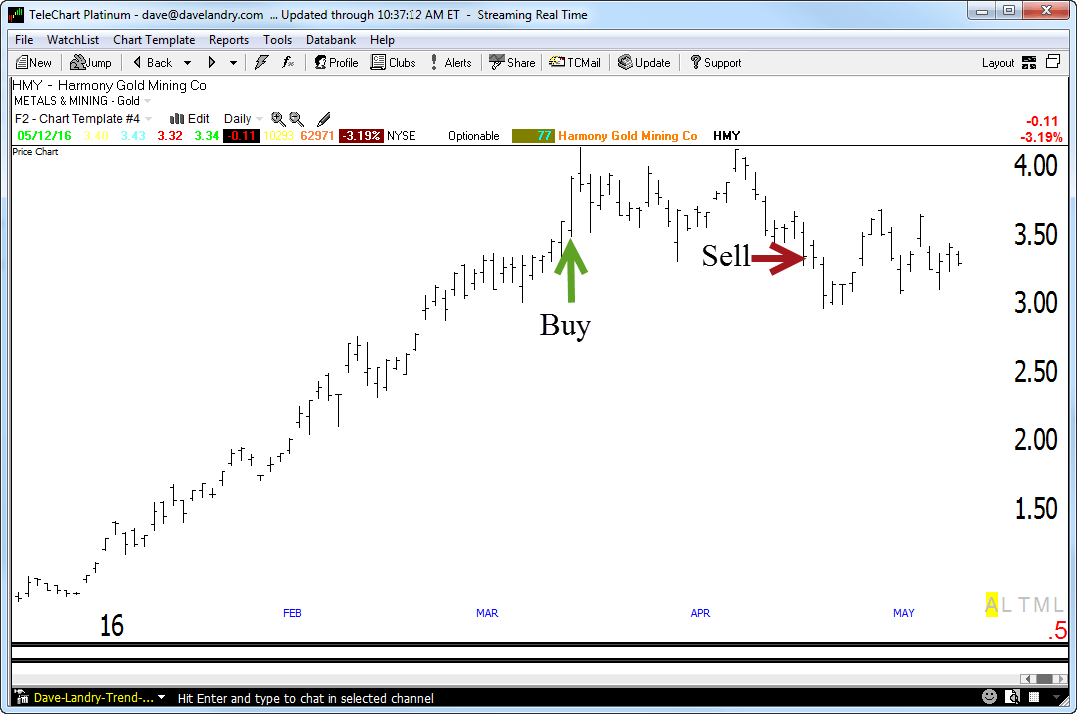 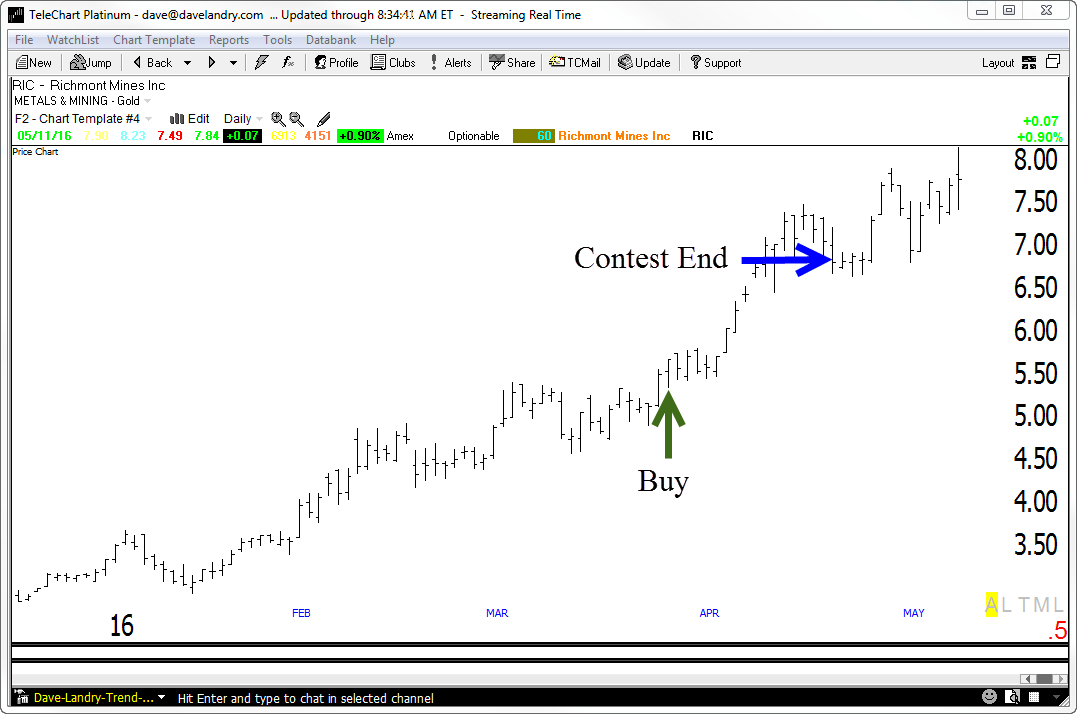 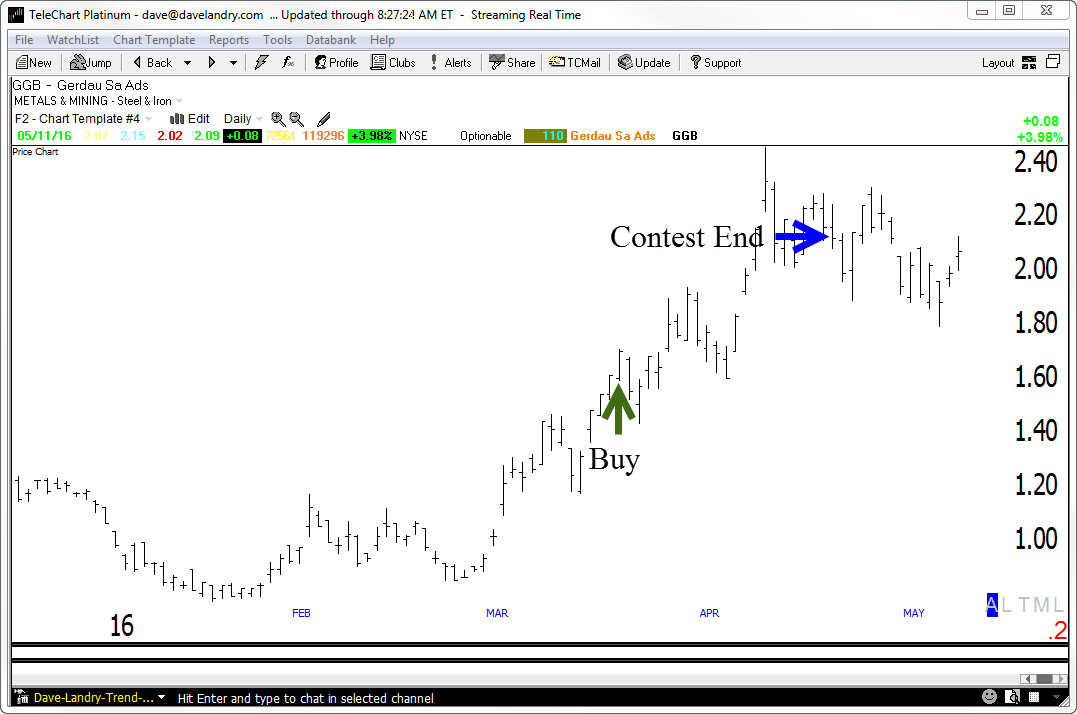 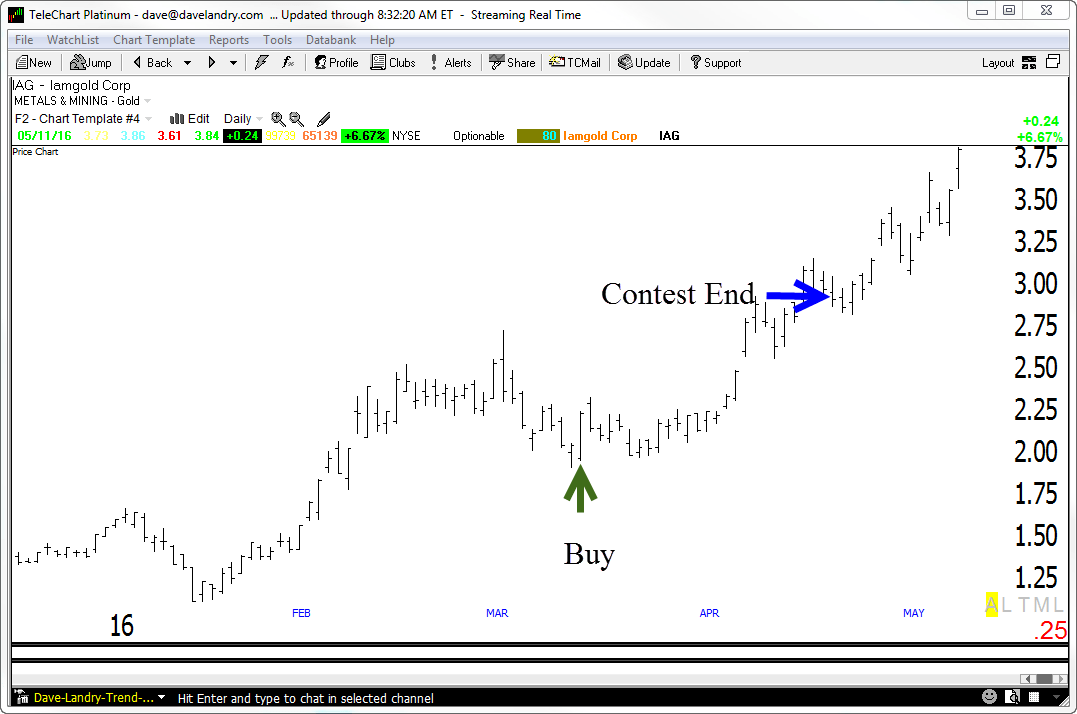 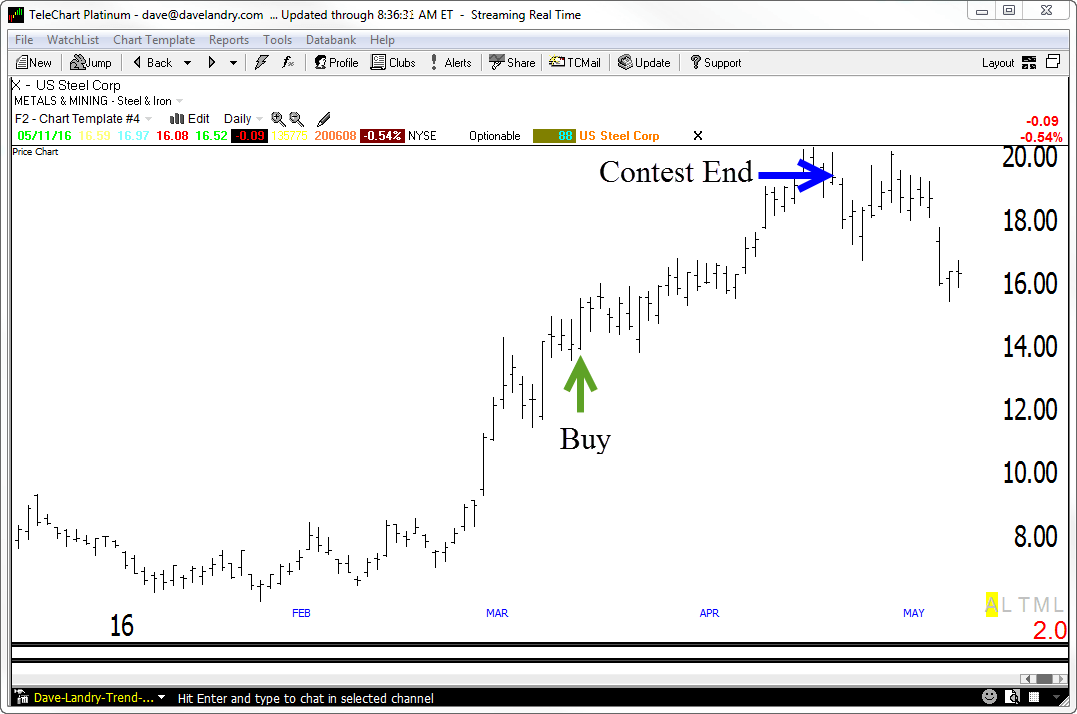 Did we, I mean she win? That information’s a little sketchy. Am I an old fart (that’s rhetorical, please don’t answer) or is getting information out of a millennial nearly impossible? All she said when I asked who won was “some kid who put a million dollars into some cheap stock on the first day” (which violated the rules, read further). Like Andrew, she got her A and is “bye Felicia” too.

So Why Not Just Buy New Highs All The Time?

I do have one pattern that buys highs (with some caveats) which I use with I﻿﻿nitial Public ﻿﻿Offerings. Notice that I, I mean my daughter, did buy a couple of IPOs at new highs. In stocks in general though, I think the only way that you could just buy new highs is if you had a very large portfolio and was just putting a little into each stock. Regardless of what you did, you’d eventually need some money management. Pure relative strength type trading can be wonderful but it does tend to end badly. Looking to the charts above, notice that the timing was in my daughter’s favor (and assumingly Andrew’s too). With one notable exception, all of the positions ended on a high note.

What Else Can Be Gleamed?

1, Well, overleverage will work until it don’t. The kid who won put a “million dollars” into one stock. So, she used 100x leverage (which violated the rules which said that they could only “invest” $10k, trust me, I wanted to sneak a little margin into the equation). I don’t know all the details of Larry Williams’ venture but it’s safe to say that he was taking on excessive risk and using leverage to his advantage. The greater than 50% drawdown near the end suggests this.

2. Do buy stocks that are going up and don’t seek bargains. There’s a reason why a stock is cheap-nobody wants it. Never forget that it’s always darkest right before it gets more dark.

3. Don’t seek comfort in the familiar. Other than knowing the representative sector, I usually have no idea what a company does.

4. Over weighting in one sector works as long as that entire sector goes higher. Notice that we were long mostly commodity related stocks. Those stocks begin to correct after the contest end-again, timing helps. The could have ended badly but remember, we're not running the money forever, we were trying to win over a short allotted time.

6. Having Larry Williams or Dave Landry as your friend or father helps.

I often lecture about the importance of net net price change in Big Dave’s school of trend following. Where is the market relative to where it was? The Ps (S&P 500) are just about where they were a month ago and are lower than they were 6-months ago. They also have a lot of overhead resistance to overcome.

The Quack (Nasdaq), like the Ps, hasn’t done much longer-term. It has even more overhead supply (or resistance if you prefer) to overcome.

The Rusty (Russell 2000) remains the worst. It has a big fat trading range just above current levels. So far, it appears that a bear market remains in place here.

Apple’s banging out new lows. Yes, it’s just one stock but it’s a Wall Street darling, owned by over 5,000 funds. Further, it’s a big part of the indices. So, to some extent, as goes Apple, so will the market.

Most sectors are either stalling out near at or shy of their old highs—like the indices.

Some in longer-term downtrends like the Drugs have turned back down.

Aftershocks from Apple are causing Selected Technology to rollover/continue lower.

So, you’re bearish, huh Big Dave? Well, I hate to label myself but it “ain’t pretty.” However, I see no reason to short with both fists just yet though. Get ready to get ready. Again, I think I’m right, just early (See this recent column). Sans﻿﻿ ﻿﻿2007, this is the slowest rollover that I’ve ever seen. I don’t think we have to figure it all out today. Just keep chipping away at it day-by-day and setup-by-setup. Now’s the time to be super selective. Return of capital is sometimes more important that return on capital. I still like the aforementioned Energies and Metals & Mining but they have been weak shorter-term so wait for entries here. As I preach, it’s okay to sit on your hands. Now’s one of those time. I'm just glad I don't have to win a stock contest now.