Will The Frog Boil? – Dave Landry on Trading

Will The Frog Boil? 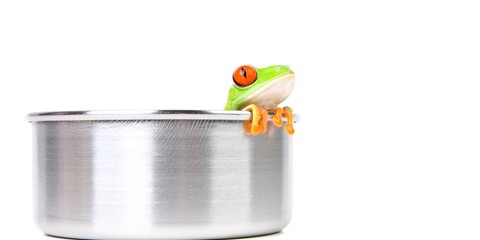 Before I go off on a tangent, let’s look at the scoreboard. The Ps tailed lower but reversed to close in the plus column. This action has them not too far from all-time highs but it also keeps them exactly in the middle of a 2-month sideways range. The Rusty (IWM) and Quack (Nasdaqa) closed up .50% & .90% respectively after dipping lower.

We have two markets. There’s one that remains shy of all-time highs but chops back and forth sideways—which has changed direction in 6 out of the 6 days. It remains flat on a net net basis for over two months. In other words, the big blue arrow points sideways. And, the other “real” market which in a downtrend. It is much better represented by the Quack and the Rusty. It is the real market that worries me.

Most stocks remain in downtrends. Read my recent columns for some stats on that.

Most of the stocks that remain in uptrends are the Defensive issues. At the risk of preaching, it has been mostly these issues propping up the Ps. So the question remains, what’s going to happen when they finally correct (in earnest)?

Another concern is that we seem to be getting more and more debacle de jours. What’s scary is, most of these are in the high flying Defensive areas. Lately, I’ve seen some individual issues in the Foods, Energies, and Utilities begin to crack.

The logical thing  in times like these is to play it safe in these Defensive issues. The problem is, just because something is low in volatility doesn’t mean that it can’t hurt you. Write that down. Low volatility markets aren’t immune to a large expansion in volatility. Exhibit A would be the aforementioned debacle de jours. Better the devil you know is what I preach. I’d rather trade issues higher in volatility to begin with.

Again, the narrow leadership is troublesome. Yet again, the Ps continue to mask what’s going on internally. The deeper you dig within a sector, the more problems you seem to find. In some sectors, one or two big stocks seem to be carrying the load. I suppose the other problem is, what’s going to happen if any of these big stocks begins to crack. Apple is best example here. As goes Apple, so will go Computer Hardware but what about other indices where it has a high weighting?  I know, Apple’s hanging in there. I just hate to base a market on narrow leadership and a cult stock.

Yes, the market bounced on Friday but there is a lot going on internally.

Speaking of Friday, on Friday I poised the question, am I the only one seeing this? I got quite a few responses confirming what I’m seeing. Looks like y’all are doing your homework. Kudos.

As I wrote a while back, the market appears to be coming unglued. What’s strange is that I’ve never seen it happen this slowly. This too is concerning.  As implied recently, is the frog being boiled slowly?

So what do we do? Well, not much has changed, so I cut and paste: I don’t think anything drastic needs to be down. As usual, take things one day at a time and one setup at a time. Yes, it’s not pretty but you don’t want to make drastic decisions. Do make small decisions on a daily basis. If you like a setup, then take it. Just make sure you wait for an entry and have a plan. On the long side, I’m still looking at the Defensive issues such as the Energies, although I’d use liberal entries here just in case we see further deterioration internally. On the short side, I think we could end up with the bigger they are, the harder they will fall situation. So keep an eye on tech issues that are just coming off of major highs. Again though, don’t get too aggressive one way or the other. Yes, the market looks like it wants to go lower but so far, it’s been a very choppy ride. With a 2 month plus sideways arrow in the Ps, you don’t want to be too aggressive as a trend follower.