The Questions That You Really Need To Be Asking Yourself 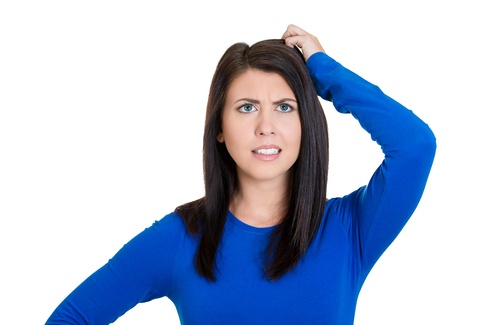 I’m getting quite a few emails asking me if this is THE top. It doesn’t matter. Don’t worry about that. There are much more important questions that you need to be asking yourself. Now, before we get into that, since you want to know the answer to the $64,000 question, let’s see if we can answer that.

TKO or Just Plain Knocked Out? 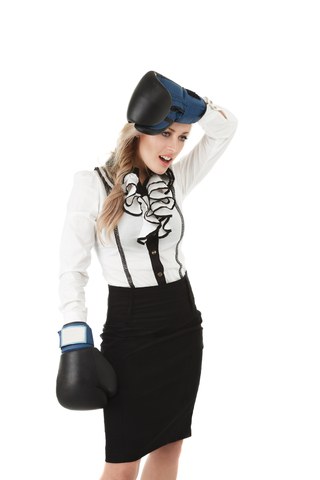 As this debacle was beginning to unfold, I poised the question, would this be just another Trend Knockout (TKO) like we saw last October on a monthly chart? A TKO is simply a “shakeout” move that shakes out nervous longs and attracts eager shorts. The predicament of these traders can then help to propel the market higher. This time may be different though. Notice the last one came after a pretty serious and persistent move higher. Now notice that we didn’t see much forward upside progress since (a) and worse, the sell off so far is nearly all the way down to the prior move (b). When trading a pullback type pattern, you want to see more  “stair step” type action vs. mostly sideways. 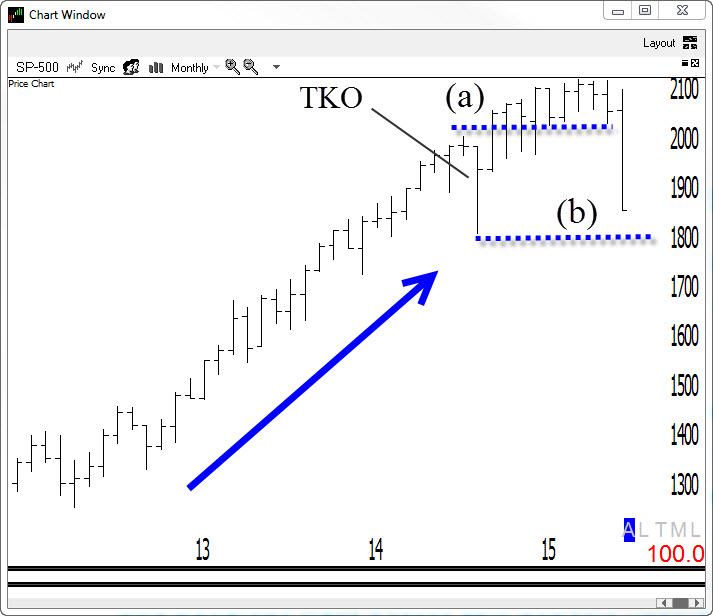 The weekly Bowtie pattern—a convergence and crossing of a 10-simple, 20-exponential, and 30-exponential moving average over a short period of time followed by at least a 1-bar pullback—has done a very good job of signaling every bull and bear cycle over the last 15 years or so. Also, just the plain ole slope of the 50-week moving average would have done a pretty darn good job of keeping you on the right side of the market throughout history. Like all indicators, there is obviously some lag but for the most part, again, simple methods like this can help to keep you on the right side of the market. 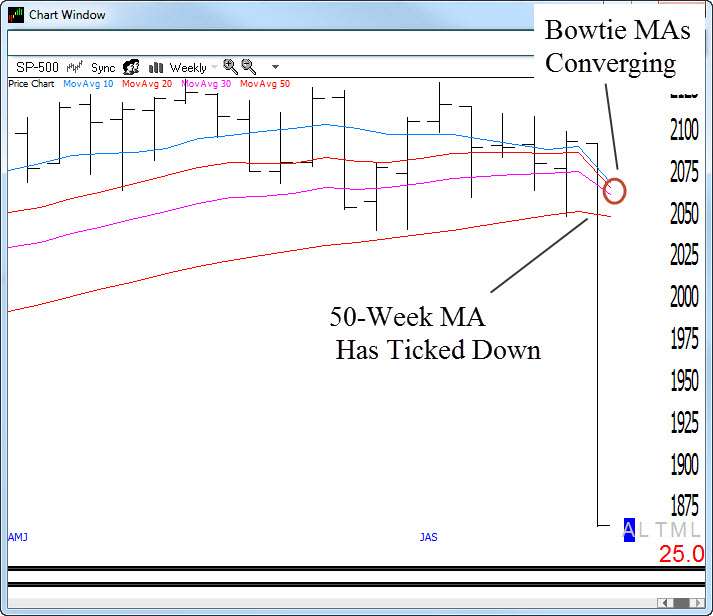 I have an article that I submitted last week for publication this week in Proactive Advisor Magazine  that fleshes out the above in more detail. I’ll put the link in my next column. Also, I’m going spend quite a bit of time discussing all of the above in Thursday’s Dave Landry’s The Week In Charts. Catch up on last’s week’s today so you can see it all unfold in realtime. It’s a beautiful thing.

Home Off The Range

Friends and family are beginning to call with concerns about be. I’m fine. As mentioned recently, the market has pruned the portfolio slowly and systematically over the last few months. For the most part, we have been sitting on our hands waiting for opportunities.

The average folks are a little slow to act. I’m sure many probably finally threw in the towel in early March 2009 and they probably just got around to getting back in recently. Anyway, the point is that most will hope vs. sell first and ask questions later. And again, the longer and further the market stays below overhead supply, the harder it will be for it to get back through it. 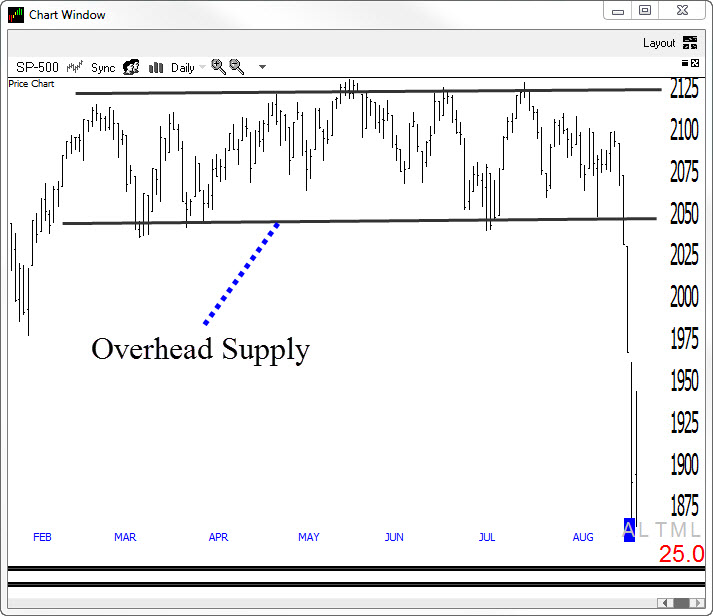 This market reminds me of a question on one of my MBA exams. We had to determine why the hardware store located under the brothel went out of business. After quite a few calculations, we realized that the answer was pretty simple. It went out of business because there was too much f’n overhead. I guess I might have to apologize for that one. Lighten up Francis. Market talk can be pretty boring. I’m just trying get at least one of you to spit coffee into your monitor.

The sector action has been abysmal. There’s no need to walk you through it.  Nearly everything has been imploding.  Gold and Silver might be bottoming in here but that’s about it.

Abysmal sector action, overhead supply, sell signals in the works, and people beginning to get a little nervous suggests that yes, the market has topped–for now.  It almost seems too perfect and too obvious. As usual, just take things one day at a time. 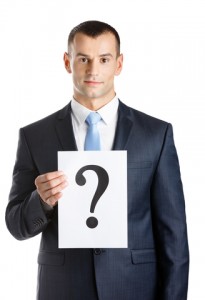 More Important Questions That You Should Be Asking Yourself Now

Forget about the top talk for a minute and ask yourself these questions: Have you been following your plan? Have you allowed the market to take you out of longs and been very selective on new ones while the market was stuck in the range? Are you going to continue to follow the plan which means listening to the database? 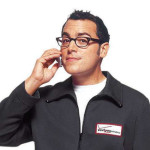 Can You Hear Me Now?

Listen to the database. It will tell you what to do. In the past few months it hasn’t produced very many meaningful setups. And, when it did, we had to weigh that against the background of the sideways market. I’ve bored my clients to death-and I guess you too—by preaching to sit on your hands. I suppose now you know why. The market has slowly but surely been stopping out longs-some at trailing stops for profits and, to be perfectly honest, some for losses. It has effectively pruned the portfolio down to just 2 half positions right before this debacle unfolded. And now, we have just ½ of 1 left. It doesn’t always unfold so cleanly but usually as things deteriorate internally, the market will start taking you out of positions. I think this is a great testament for he who fights and runs away, lives to fight another day.

The seasonal volatility came a little early this year. We have been mostly biding out time waiting for it. I’m glad the market’s finally moving. A country girl I once dated used to say: “If I had my rathers.” In my best country girl voice: “If I had my rathers,” I’d rather the move would have been to the upside. Obviously, it wasn’t so as traders we just play the hand that’s dealt. This means that we continue to listen to the database. This means shorting as they present themselves, trading only buy side setups when they knock our socks off or when we feel like they have the potential to trade contra to the overall market.

Just do what you always do. Listen to the database. Follow your plan. Honor your stops. Be selective on new positions. And, wait for entries on those. Let the gurus question the market. Do question yourself. Are you doing these things?