The Flag Remains The Same – Dave Landry on Trading

The Flag Remains The Same 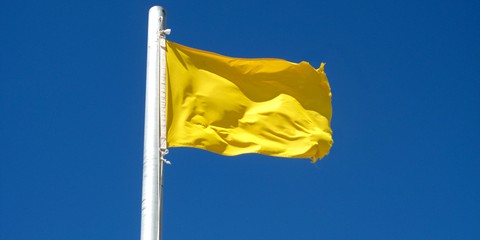 The Ps had a decent day, closing up ½%. So far, they still have the updward “wedging” drift look. Obviously though, ½ percent per day, each day would fix this. They did manage to close just above the May peak. This action puts them back at all-time highs.

The Quack tailed higher but came back in close flat. This action keeps is short-term bearish wedge intact.

The Rusty was strong but did end off its best levels. It looks the best out of the 3 but has still lost a little momentum nonetheless.

Bonds sold off hard. They appear to be resuming their sharp downtrend out of a pullback. I remain concerned about the delta of rates. Sooner-or-later, this will put pressure on stocks. Something else to worry about.

The Semis, which have recently lost steam, forming a wedge, sold off hard. So far, they appear to be a false breakout/potential double tops.

As mentioned on Thursday, I’m not a big fan of markets that drift higher. I like to see markets accelerate higher then correct by pulling back. When a market drifts or “wedges” higher it can often suggest that buying is waning and a correction is looming.

And again, there are patterns I observe and patterns I act on. Overbought markets, double tops, and upward “wedges” are examples of patterns that I observe. These are caution flags vs. bona fide signals.

So what do we do? Not much has changed: The markets still remain overbought. As I’ve mentioned ad nauseam, this is a dangerous environment to be trading. If you buy, it corrects. If you don’t, it continues on without you. Therefore, I’m still in the “sit on your hands” camp. If this is the real deal, they’ll be plenty enough time to buy along the way. Ideally, I’d like to see the S&P break out decisively past its prior peak. And, I’d like to see the Rusty and Quack accelerate higher. Once this occurs, an orderly pullback would be awesome, followed by a nice resumption of trend. That’s what I want. The market doesn’t care what I want though and will probably give me something else. This is why I’m a day to day kind of guy. So for now, I continue to fly the caution flag. The good news is that there are very few meaningful setups. This is usually a sign that I should remain patient.