The Expansion In Price Begins Today–This Time I Mean It 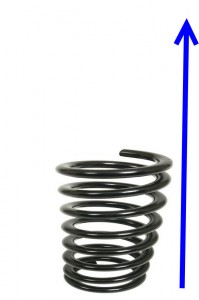 As I explained in yesterday’s chart show, volatility is like a spring. When it gets compressed it tends explode because traders don’t agree for too long. Lately, the markets have tested “too long.” Offhand, I don’t ever remember the reading being so low readings for so long, maybe back in one of the summers where low volatility is expected (e.g. August 2012).

The futures are up big pre-market so we might just the beginning of that volatility expansion this morning (this time I mean it). As I also said in the webinar, volatility can also be equated to a pendulum, swinging from low to high. The reason for that analogy is that it doesn’t just revert to the mean (average), it tends to overshoot.

The only caveat is that is dangerous to take the first move out since the first move can often be a false one. This doesn’t mean you should blindly fade the move. Wait to see if it comes right back in (let’s hope that it doesn’t). And if it does, that’s where it can get a little ugly since those who bought the breakout are now trapped on the wrong side.

One last point, as also pointed out yesterday, volatility does not predict price. It only suggests that a move is coming. So, don’t fight the tape. On the flip side, it’s a little dangerous to jump in with new positions on a breakout at these levels but again, you certainly don’t want to fight it.

The Ps (S&P 500) ended up .20%. This action keeps then within a ¾% closing range for the last 10 calendar days—yet another measurement of how low the volatility has been. Nevertheless, it did close at all-time highs.

The Quack (Nasdaq) had a decent day, gaining just over ½%. On a net net basis, it too hasn’t moved that much lately either. It does remain just shy of 14-year highs.

The Rusty (IWM) was the big winner, gaining over 1%. It has its prior peaks to attack but so far, so good. It appears to be attempting to rally out of a pullback.

Chemicals have been clawing back as of late and are now just shy of new highs.

So what do we do? Since the methodology requires a pullback, I’m not seeing many new meaningful setups at this juncture. Therefore, manage what you already have. FWIW, right now, we are long Uranium and Biotech (see yesterday’s chart show for the actual portfolio). Let things shake out. If the expansion in volatility lifts your stocks to the initial profit targets, then take ‘em. Just remember to honor and trail your stops.