TA101: Be A Trend Following Moron – Dave Landry on Trading

TA101: Be A Trend Following Moron 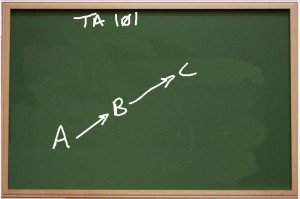 If A < B and B <C, then a market will have to pass through B on its way to C. If a market is in an uptrend, it will have to make new highs. That’s Technical Analysis 101 at its finest. And, that’s what makes TA great–this concrete rule. There are no hard and fast rules with it comes to fundamentals. A company can have great earnings for years and go down or have crappy earnings and go up.

So, Big Dave, should we run out and buy a market every time it makes new highs? Unfortunately, it’s not that simple. However, you certainly shouldn’t fight it.

Lately, my theme has been not to argue with a market is at or near new highs.

Yes, corrections will be painful, but as long as you keep your eye on the big picture trend, you’ll do just fine.

Sooner or later a correction will turn into a top. It’s the “or later” part where many fortunes have been lost.

Since you never really do know, you can’t completely throw caution to the wind. Honor your stops on existing positions and wait for entries on new ones. This will help to mitigate the damage and help to keep you out of new trouble.

If a market is just off of new highs, don’t get caught too caught up in the panic on a weak day.

It might feel like the sky is falling and the Chicken Littles out there will be chirping that they told you so. Just remember, one strong day is all that’s needed for a “do over.”

And, again, err on the side of the longer-term trend.

I used to try to outsmart the market. This was especially true when I first started providing commentary on the Internet over 15 years ago. I felt pressure to call every zig and zag. I quickly realized that I was chasing my own tail. I settled upon drawing my arrows and have never looked back. This caused some controversy. At one point, an angry trader told me that I was “nothing but a Trend Following Moron.”

The name stuck. T-shirts and mugs were made. I added the 3 trend arrows—Up/Down/Sideways– to the back of my business card to guide me if I ever lost my way in the markets.

Also, never forget to back the chart way out. What feels like the end of the world might just look like a blip on the long-term chart.

Err on the side of the longer-term trend. Again, many of fortunes have been lost calling tops. Until you have signals that the trend has obviously turned (e.g. a Bowtie, First Thrust, or other transitional pattern), stick with the trend.

The Ps tacked on another ½%. This is enough to put them—albeit barely—at all-time highs.

The Quack broke out to multi-year highs. For the day, it gained just over ¾%.

The Rusty also had a good day. It gained 3/4%. This action has it breaking out to all-time highs.

As the broad based Rusty (Russell 2000) suggests, internally, the market is strong. Most sectors remain at or near new highs and it solid uptrends.

As you would imagine with the Quack at multi-year highs, technology looks great. Drugs have been blasting higher as of late. Hardware, Software, and the Semis have also been banging out new highs decisively.

A variety of other areas look pretty good too: Chemicals, Banks, Transports, Financials—to name a few—all remain at new highs.

There are a few areas stinking up the joint like Retail but for the most part, most areas remain in trends.

So what do we do? With the market remaining at new highs, nothing changes: Continue to err on the side of the longer-term trend. On existing positions, do take partial profits as offered and trail your stops higher. Eventually, it will end. “Eventually” can be a long long time—at that’s what I’m counting on (or at least hoping for!). On new positions, enter if, and only if, the stock triggers. As I preach, that, in and of itself, can often keep you out of new trouble. And, once triggered, use protective stops just in case.