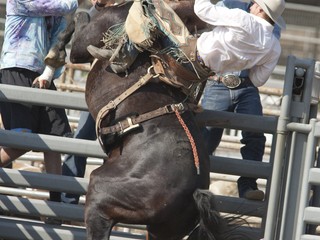 In this business, you rarely get to have your cake and eat it too. I recently said that ideally, I’d like to see this market have a shake-out move but not take my (and my peeps) positions out with it. This would help to remove some of the “Johnny-come-latlies” or the so called “fast money”—those that are the first to bail at the first signs of adversity. They are usually the last to buy and the first to exit.

In the spirit of my Trend Knockout Pattern (TKO), the market sold off but then promptly reversed. This may have been enough to attract some eager shorts and gotten rid of some of the aforementioned fast money. Now if the market goes on to make new highs, it will be propelled higher by the predicament of these traders. The shorts will be forced to buy (i.e. cover) and the longs knocked out will have to pay up or risk being left behind.

The Ps (S&P 500) gapped lower but found their low by mid-morning and then began to rally nicely. They didn’t quite make it back to the plus column but the reversal was very impressive nonetheless.

The Quack (Nasdaq) also gapped lower but not only reversed, but managed to tack on ½% plus for the day.

With the market making a significant intra-day reversal, as you would imagine the sector action was also impressive.

Gold and Silver put in solid rallies. They appear to be back to bottoming. Notice that I used the gerund. It will likely be more of a process than an event here (although I did think I called for a bottom in 2015 sometime in June around noon—see recent columns).

Energies bounced a little but so far their free fall remains intact. You see, I am trainable. I avoided saying “dead cat bounce.”

There’s too many to list (see recent columns) but many trending sectors that have pulled back recently are now attempting to resume their uptrends.

Some sectors such as Biotech actually went on to bang out new highs.

Covel, based on a statement by Dunn, equates trend following to trying to ride a bucking bronco. “We don’t make market predictions. We just ride the bucking bronco.” Bill Dunn

Trend following looks pretty easy, at least until you try it. It’s the markets job to shake you out and then promptly turn around and go right back to trending. This is not to say to throw caution to the wind and hold on at all cost. Sometimes a market turns and never looks back. As I preach, he who fights and runs away lives to fight another day. Stops must be used. Speaking of stops, in Thursday’s webinar I’m going to explain stops vs. risk. I’m going to show how wider stops in more volatile stocks is actually a less riskier strategy that tight stops in lower volatility stocks.

So what do we do? I knew the calm upward drift wouldn’t last forever but I also knew not to fight it. I like the fact that we had a test of the trend. Now we can get back to the business of getting on this bucking bronco. Regardless of what you do, at the risk of preaching, make sure you wait for entries and honor your stops once triggered.

P.S. My IPO Course is on sale. Save $200 off the original price. Hurry, sale ends on Monday, December 15th. Buy now and you’ll have access to my last live session. So far, we’ve been able to ferret out some decent winners during these sessions. See the trading in theory and then see it in reality. Click here for more info.