Looks Like Santa’s Going To Come – Dave Landry on Trading 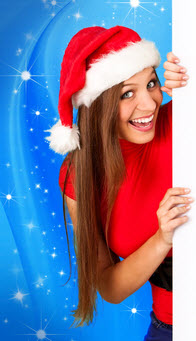 It’s always darkest right before it gets more dark. That’s something I often joke about with the market. Just because it is oversold doesn’t mean that it can’t become even more oversold—and that’s exactly what it did on Tuesday. Using the recently beaten to death bouncing bronco analogy (Covel/Dunn), a market’s “job” is to shake out as many as possible.

Make no bones about it, Tuesday’s action was pretty ugly-how’s that? An oxymoron from a Trend Following Moron.

Wednesday’s do over was just in a nick of time. Speaking of nick, we were beginning to wonder if Saint Nick was going to come this year-see yesterday’s column.

The Ps (S&P 500) came back with a vengeance, gaining just over 2%. This action has them stabilizing in their pullback, it puts them back above 2k/their prior breakout levels, and it puts them right back to their 50-day moving average.

For the most part, ditto for the Quack (Nasdaq). It was slightly stronger and did manage to close above its 50-day moving average.

The Rusty (IWM) was the big winner on the day, tacking on over 3%-Wow! This action has it plowing back through resistance like butter. Now, if it can only string together a few of these we’d be back at new all-time highs.

Many sectors followed suit with the Ps and Quack. They stabilized in their pullbacks. Insurance, Financials, Health Services, Semis, and Drugs are good examples here (there were quite a few others too). Speaking of Drugs, Biotech began rallying nicely out of its pullback—tacking over 3 ½%.

Real Estate (REITS) is behaving like it’s 1999. They gained over 2 ¼%–which is a big deal for Real Estate—and are closing in on new highs.

Futures are up huge pre-market so it looks like we’ll see some follow through—at least on the open. Based on the number of bears which have recently come out of the woodwork (see recent columns), I would imagine that we will see some follow through covering type of buying. After that, we’re back to wait and see mode. So far so good though. At the moment it appears that we have dodged a bullet and Santa really is coming.
So, what do we do? As I have been preaching, when things get a little “iffy” you can’t take drastic action. Do watch for clues and additional deterioration but don’t sell the farm. The bears will have you believing that it is as easy as flipping a switch. Trust me, it’s not. Do watch for sell signals (e.g. Bowties) but don’t anticipate them. The bottom line is the plan for questionable times is the same plan for not so questionable times (here it comes): honor your stops, wait for entries, and make sure you really like a setup to begin with. And, of course, listen to the database. Lately, I haven’t seen a lot of new meaningful setups. This tells me to let things shake out a bit.