Jones Is Wrong: You Ladies Are Better Than Us Dudes – Dave Landry on Trading

Jones Is Wrong: You Ladies Are Better Than Us Dudes 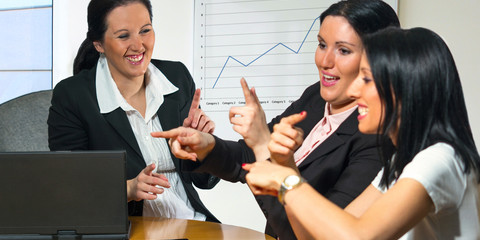 In last night’s webinar I was addressing the men and then realized that we had a few ladies in the mix. This got me thinking about the famous hedge fund manager Paul Tudor Jones who got into a little hot water a while back-me going off on a tangent, shocking! He said that women make bad traders due to their emotional nature.

From my observations, I’d argue just the opposite.

The women who are following along with my trading service tend to be more successful than the men. They get the same exact information yet they tend to do better with it. Why? I think the reason is that us dudes have a bigger ego to deal with. And, I’d say that an ego trumps emotions when it comes to the psychological pitfalls of trading. A big ego makes us want to tough it out when we should exit. It makes us want to get in or out early to beat the system. It urges us to do things that will prove we are right—often forgetting that being right and making money can be diametrically opposed.

You Have To Embrace, Not Eliminate

The unfortunate who have had illness or injury damaging part of the brain where emotions originate (part of the Limbic system) can no longer make decisions-any decisions.* Without emotions, you couldn’t even decide what to have for lunch, let alone make trading decisions. So, in spite of the many who say that we have to eliminate emotions from our trading, that’s just not how it works Beatrice. We have to embrace them and not eliminate them.

Where The Ego Flies

I suppose the caveman needed a big ego to fight off the occasional dinosaur that found its way into the camp. Now before you email me to explain the Cretaceous vs. Jurassic periods, it’s just a figure of speech. Although, what if scientist took the DNA of dinosaur fossils and recreated them for profit? Nah, it probably wouldn’t work anyway because everyone knows that dinosaurs make bad theme park attractions because they like to eat people.

I’ve retired my ego long ago, at least when it comes to trading. Why else would I refer to myself in the self-deprecating way as a Trend Following Moron? I’ve given up trying to look smart when it comes to the market. I know that I can’t impose my will. I can follow along. Whenever my ego begins to rear its ugly head, as a good little TFM (well, I’m a biscuit shy of 270, so I’m not that little) I just ask myself: Is the market going up?, down?, or just plain sideways?

In conclusion, embrace your emotions and keep your ego in check-something us dudes can learn from you ladies. Check out last night’s webinar for more on this:

The Ps (S&P 500) had a decent day, tacking on a little bit more than ½%. This action puts them back to where they were last Friday which is pretty much where they were last December. The market is going sideways. Like Pinocchio being a bad motivational speaker, everybody knows that.

The Quack (Nasdaq) also had a decent day, gaining a like amount. It too remains stuck in a sideways range.

My favorite, the Rusty (IWM), was very impressive. It gained nearly ¾%. Like its brethren, it is also in a sideways range.

The good news is that the indices, especially the Rusty, aren’t too far away from all-time highs. Unfortunately though, you still have to get there.

As you would imagine, most areas, like the overall market, remain stuck in a sideways range. As mentioned recently, it will be important for the bottom of these trading ranges to hold. Retail makes for a good poster child here. It bounced nicely off the bottom of its range on Tuesday but let’s not start kissing each other just yet until we see what Wednesday brings.

Some selected areas such as Regional Banks and Health Care Plans have broken out of the top of their ranges.

So, there’s some strength but it’s a little mixed overall.  The Transports have recently broken down. Metals & Mining appear to be on their way to visit their old lows. Bonds bounced but interest rates are still on the rise.

Well, first, with the market trading sideways be super duper selective. Brush on up your stock selection. Watch this video for starters. In light of the overall conditions, you probably want to sit on your hands and your ego unless you truly think you have the mother-of-all setups. Do continue to generally err on the side of the longer-term uptrend as long as the major indices remain wall above their longer-term moving averages—see last night’s webinar (above) for more on this.

*Credit: I first learned this from Denise Shull who was a fellow speaker at a trading conference a few years back (TSAA-SF at GGU). In more recent times, I have studied this further though the writings of Damasio.