“It’s The Big One, Elizabeth!” – Dave Landry on Trading

“It’s The Big One, Elizabeth!” 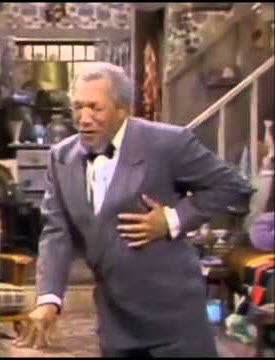 It’s The Big One Elizabeth

Markets fake out and shake out quite often. In fact, we can use this propensity to our advantage (read further). Like Redd Foxx ironically dying on the set from a heart attack, sooner-or-later though, it will be the big one.

The Trend Knockout is when  a market in a strong and ideally persistent uptrend has a healthy correction. This knocks out the so called “fast money,”  the johnny-come-latlies that are last in and first out. It also attracts eager shorts. When-and you do wait for “when” before you get in-the market turns back up, the predicament of these traders helps to propel your position higher. Back in October of 2014 we had a TKO on the monthly Ps (S&P 500). This was after a very strong and persistent move higher (a). Unfortunately, this time it’s different (I know, dangerous words but it is). As mentioned recently, this knock out comes after a mediocre move higher (b) since the last correction (the TKO). And, it is nearly all the way down to the prior knockout. Ideally, you want to see market stair step higher. 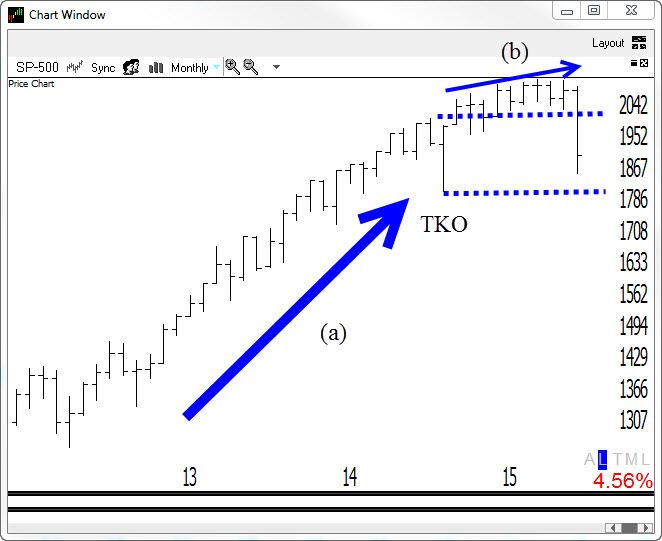 BTW, I’m often asked how deep the TKO has to be. If you’re already long and it hurts and/or if you get stopped out, then it’s probably big enough. It has to cause some pain, otherwise no one would be knocked out and sucked in on the other side.

All Dressed Up And Nowhere To Go?

All tops and bottoms will have emerging trend signals. That’s a fact. This doesn’t mean that all signals will turn into the mother-of-all tops/bottoms. However, you have to take them seriously just

in case this one is the big one. The Ps have now formed a weekly Bowtie down. I did a Youtube on this pending signal on Monday. If you don’t have 2 minutes to spare, just know that we had a sell in early 2000, a buy in 2003, a sell in early 2008, and a buy in early 2009. Maybe, (and hopefully?) this one won’t work but as you can see from history, you probably at least want to pay attention.

Keep in mind that with everything I do, there’s the signal, the setup, and then the trigger (see last week’s Dave Landry’s The Week In Charts). So, “officially” it’s not a trigger until 1872 gets taken out decisively.

Love The Trend You’re In

Bear markets aren’t my favorite. They often sell off hard before you can get on. And, when you are “lucky” enough to get in, they retrace strongly back up to knock you out and then go straight back down. My point is that if things continue to deteriorate,  the one thing that I can guarantee is that it’s going to be bumpy. I just have to remind myself that if you can’t be in the trend you love, then love the trend you’re in.

I’m Calling It, Well, Sort Of

So Dave, are you calling a top? Predict early and often is what many do. And, many of careers have been launched by eventually getting it right. Unfortunately, when it comes to putting your money where your mouth is, the road to ruin on Wall Street is paved with those who were right be early. Being right and making money are two different things. No need to look like a hero, just follow along. Follow the plan.

So What’s The Plan?

Do as you always do. Let stops take you out of any leftover longs. We have ½ of one long position left. As mentioned recently, the sideways grind this year has slowly yet methodically pruned the portfolio. Trust me, it doesn’t always play out this well but it sure is nice being mostly flat when it does. Listening to the database has kept us mostly out of new trouble. For weeks, I couldn’t find a decent long setup to save my life. I was worried that my clients were thinking why am I paying this guy? Well, now you know the rest of the story. 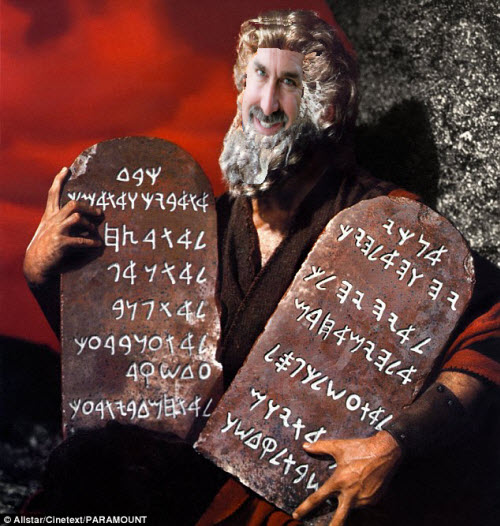 1. Honor your stops
2. Wait for entries
3. Listen to the database
4. Don’t try to make something happen in less than ideal conditions
5. Take partial profits when blessed with them just in case the trend doesn’t continue
6. …..and trail a stop on the remainder just in case it does
7. Focus on making money and not trying to look smart-a pivotal point in my career is when someone said that I was “nothing but a trend following moron”—nailed it!
8. Plan your trade
9. Trade your plan
10. See 1-9 🙂

So What Do we Do?

As usual, take things one day at a time.  As long as you’re doing the 10 things above then you’ll be just fine–even if this is the big one.