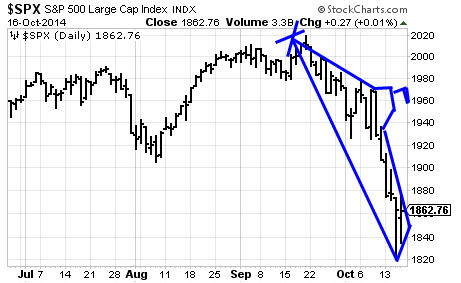 Well, it’s official. The Ps (S&P 500) have now formed a submarine pattern. So, does this mean that they will just go down? No. Of course not. We’ll likely see the mother-of-all short covering rallies at some point, maybe today-futures are up strong pre-market.

Obviously, the submarine is not an official pattern but it does help to illustrate which way the market has been heading and will likely continue to head.

And, now, for something completely different.

I ignore all news but occasionally I do get some through osmosis. And, yesterday I heard that the Fed said “just kidding” regarding taking away the punch bowl. Here’s the deal. If you start being wishy-washy, eventually you’re going to lose some credibility. That’s why you always know where you stand with me. Either the market is going up, down, or sideways. Obviously, I’m not always right (and if I was, you’d never see my fat ass again) but you know where I stand. Okay, I digressed, back to following the charts and ignoring the news.

With that said, the Ps formed a nearly textbook opening gap reversal (OGRe)—you’re welcome! Well, technically, it was an opening “lap” reversal but you get the point. It found its low almost exactly on the open and put in a decent rally. I’m not a big fan of daytrading but every now and then the market offers you a gift. Now, let’s get back to the core methodology of swing-to-intermediate-term trading.

After the early morning spill, the Ps rallied to close flat on the day. It’s amazing, the market has been in such a slide that a flat day almost feels like a victory.

What’s been scary lately is that even though the indices appear to be temporarily stabilizing or at least, slowing in their decent, more and more sectors are getting decimated.

On Wednesday, Financials, Banks, Insurance, Retail, and Health Services got creamed. Retail actually continued that slide yesterday in spite of a flat market, losing well over 1%.

So what do we do? The short side remains the obvious side to play for now. However, since the market is very oversold, just make sure you wait for entries and avoid getting too aggressive until after a bounce. Other than making the occasional S&G OGRe type of daytrades, I’d continue to avoid the long side for now—unless of course you find the rare mother-of-all speculative setups that you think has the ability to defy gravity. I have one super thin IPO on my radar-the one that one of you mentioned in yesterday’s chart show*, good eye! The point is, out of 7,000 stocks, there’s only one potential long. So, for the most part, err on the side of the market.

Some more random thoughts: Again, futures are up big pre-market so we could see the beginning of a bounce today. For the aggressive, keep an eye out for an OGRe but this time on the downside. Honor your stops on existing shorts because as you know, short covering rallies can suck. They knock you out and then the market turns right back down. Of course, this doesn’t always work as advertised. Therefore, as usual, you have keep the “he who fights and runs away lives to fight another day” mentality.

Best of luck with you trading today!

Dave
*Given the nature of the market, I think it is important for you to understand emerging trend patterns. Therefore, I’m going once again upload this week’s show to Youtube. See below (upload in progress).