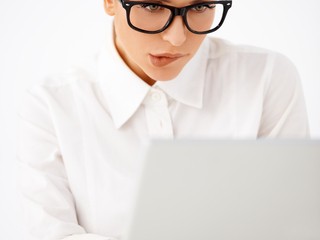 The Quack (Nasdaq) tacked on .43%. This action keeps its breakout intact and it keeps it at 14-year highs.

My gut is that if this market can bang out new highs a performance anxiety will be created with traders who have failed to participate. They will buy at any cost at the fear of being left behind.

This action could create “blow off” or bubble type move. That’s fine with me. As trend followers, we’re along for the ride.

We don’t want to think too much though—how do you think I got the name Trend Following Moron?

Take things one day at a time and setup by setup.

Speaking of setups, I’m not seeing a whole lot just yet. This makes sense.  As the market continues higher potential shorts keep pulling back and no longer are viable setups. Besides, you don’t really want to fight the tape anyway. On the long side, there aren’t a lot of setups because the methodology requires a pullback.

Getting back to the shorter-term action in the Ps, I’m not a big fan of “V” shaped recoveries at high levels. By the time the market gets all the way back to new highs, it’s already overbought. Said alternatively, it’s hard for a market to mount a leg on top of another leg. Stranger things have happened though. We could enter into the aforementioned blow off type of move but again, let’s just take things one day at time for now.

Most sectors are mirroring the action in the indices. Many bigger cap areas look a lot like the Ps where their pullbacks have pushed back into their prior ranges and towards new highs. And, many smaller cap areas remain in downtrends but keep pulling back like the Rusty.

The IPO market appears to be waking up again. Speculation might just be alive in well.

So what do we do? Since there aren’t a lot of new setups, manage what you already have. Take partial profits and trail stops higher as offered on longs. Since the market is going up for now, avoid any shorts. I make it sound easy, huh? Well, I can assure you that trading isn’t easy. It’s just not nearly as difficult as most try to make it. Try not to figure everything out. Just follow along.