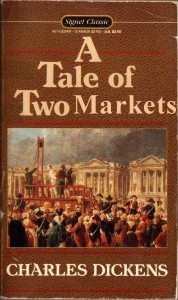 The Ps dipped a bit, found their low, and rallied a smidge on Friday. So far, their recent breakout remains intact and they only appear to have pulled back a bit.

The Quack ended flat on the day. Its recent breakout remains intact too but it has lost some momentum shorter-term, trading around where it was several weeks ago.

It seems like the recent rally has been really a big cap affair with the Ps leading the way.

It’s really a tale of two markets. Under the surface all isn’t as well as the Ps would suggest. The Rusty (Russell 2000), one of my favorites gauges for what lies beneath, retraced all of its recent breakout back to 108 (basis the IWM). It did manage to bounce off this level but still lost nearly 1/2 % on the day.

Many individual issues have been hit fairly hard as of late—see recent columns regarding recent debacle de jours.

Most sectors still remain in uptrends but some such as the Semis (especially Printed Circuit Boards), Banks, and Biotech have lost momentum.

Again, on the surface the market looks okay but it really has become mixed as of late.

So what do we do? Make sure you don’t always take the market at face value. Dig through many stocks and sectors to make sure the indices aren’t being propped up by just a few issues. Since things have become mixed, you want to make sure that you really really like a setup before taking it. And, if it does pass this litmus test, use a liberal entry to help ensure that you don’t get triggered on noise alone. I think it’s too early to go crazy bearish but I would consider a short or two just in case. Worst case, the market rallies and you lose a little on the shorts but make it all back on existing longs.