5 Things That You MUST Know When Building Your Portfolio

Note: I found this post while working on the member's area of my website. For reference, it was originally published on 03/16/16. I think it is just as relative today, especially given current conditions.

Letters, We Do Get Letters

Robert: Dave – I don’t understand: With your view of the market and the current high correlation between the market and oil, how there can be a current opportunity for buying CENX? The trend is down and you are expecting an emerging uptrend in oil. Why not wait for CENX to actually break out and start a new trend, then buy on the pullback?

Dave: Since CNX is commodity related, it can trade contra to the market. Each position is an independent event. If it doesn’t make sense to you, then ignore it.

Dave: Metals are turning the corner too. Also, commodities can trade contra to market.

Robert: Hmmm. My point is buying CNX is directly contrary to your view of the market ﻿﻿and ﻿﻿the rest of your portfolio (shorts) and the pattern is a break out pattern (to the rest of the world) which is much riskier than a pullback. And the reward comes most likely only if you get stopped out on all of your short positions.

Inspired by the aforementioned email thread, here are 5 ﻿﻿things ﻿﻿that you must know when building your portfolio, but before we do that.....

A Few Words About Emerging Trends

Before we get into some thoughts and Random Thoughts on the above, keep in mind that I get more questions about my emerging trend patterns than all of my other patterns combined. If you’re just learning to trade trends, then trade only established and obvious trends—i.e., trend resumption patterns. Start with something simple like Persistent Pullbacks or Trend Knockouts (TKOs) or ideally, TKOs combined with Persistent Pullbacks. Once you’re successful at that, you can then venture into the trend transitional patterns. Note: The latest Dave Landry's The Week In Charts is a good place to start. In it, I answer a lot of Robert's questions.

Let’s define an emerging trend (aka trend transition). An emerging trend is when a previous trend comes to an end and a new one begins to emerge. Sometimes, it can be more of a process than an event. A market may bottom out for months or even years before it begins to rise again—this is my “Phoenix Strategy.” Landry Bowties (see free reports) are often a good pattern to help illustrate a “process” bottom. Note: I purposely used the word "illustrate" vs. "indicate" since indicators don't actually indicate-they simply illustrate what's already there. Again, refer to Dave Landry's The Week In Charts for more on this. 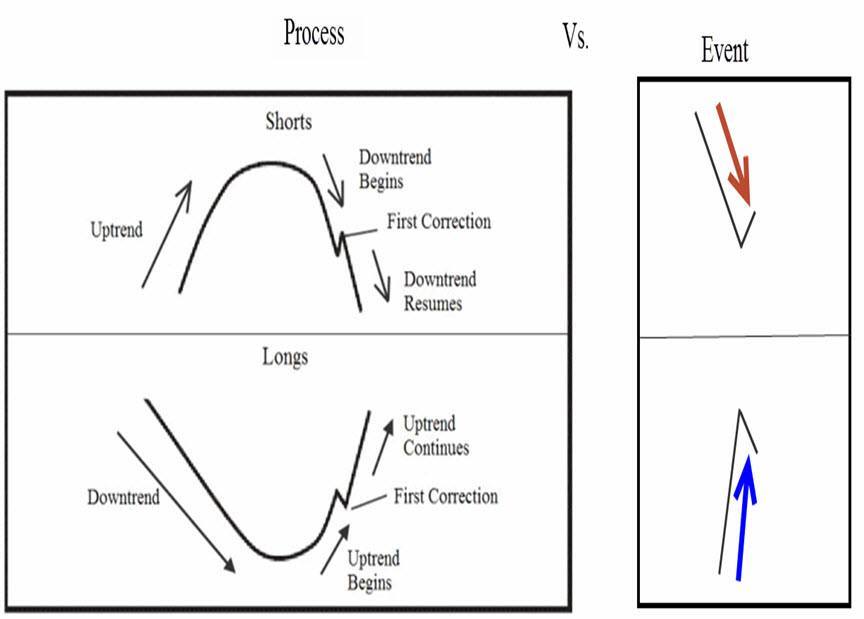 1. Don’t Confuse The Issue With Facts 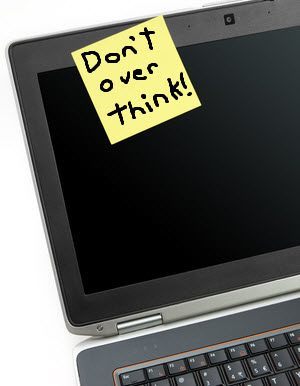 In markets you have to be careful with WYSIATI-“What You See Is All There Is” (Thinking Fast and Slow, a worthy read FWIW). True, right now, the market is trading in tandem with oil, but I ﻿can ﻿assure you that’s not always the case. The media is having yet another all-you-have-to-do-is-connect-the-dots field day with the current correlation. Unfortunately, you can’t always just connect the dots. If you could, a lot more journalists would become traders. I’m just saying.

Also, you have to be careful with too much extraneous analysis. Otherwise you’ll end up with analysis paralysis and never make a trade.

When one sees both shorts and longs in the same portfolio, one has to wonder if we are hedging. The answer is no. We are taking each setup on a stand-alone basis and seeing it to its fruition (read further).

Now, I don’t want to digress too far, but I did name this column series Random Thoughts because I know myself. With that said, hedging is one of those in theory vs. practice things. In theory, theory and practice are the same, in practice, they are not (Yogi). If you are “hedged” and the market goes against you, then your hedge makes money-yay!! I’m going to tell all my friends! Settle down Beavis (which I guess, but default, makes me Butthead). Unfortunately, you’re losing money on your core position(s). On the flip side, if you’re making money on your core position(s), your hedge is losing money. Hedges cost money too. You have to reset them. My point is, as a general statement, a hedge is a constant drain on your portfolio. True, there are some rare cases when you’re implementing a complex options strategy where a disaster hedge can be beneficial. However, unless you’re doing that and have made that trading style your life (as often discussed in The Week In Charts), it’s a bad idea that seems good on paper but isn’t in reality.

In an ideal world, the stock, the sector, and the market, are all headed in the same direction before you make a trade. In fact, if you’re newer to trading, I suggest that you only trade when they are. You’d spend a lot of time waiting, but that’s okay—read my Random Thought archives for a plethora of my preaching on patience. Anyway, my point is that each potential trade should be able to stand alone. It should look good enough to take regardless of the overall market and sector action. And, the worse the sector and market action, the better the setup should look. When conditions are less-than-ideal, make sure the potential position passes the “can’t stand it test.” If you can walk away and be okay, then pass. If you can’t stand it—you’d hate yourself if it took off without you, then take it. This what I call the Steve Winwood trade-“If You See A Chance, You Take It.”

4. Ideally, Make Sure That All The Stars Align (but they won’t be with emerging trend patterns)

With emerging trend patterns, you’re a bit of a pioneer. You’re looking to get in early. Getting there first brings the possibility of a huge reward. Unfortunately, with reward often ﻿﻿comes risk. You have to embrace this. We get paid to put capital into harm’s way. In fact, that’s the only way we get paid. This is not to say throw caution to the wind. The risks must be carefully calculated. Again, you’re a pioneer, and like the American Pioneers, you’re either going to get the gold or the arrows. The chance of the gold makes it all worthwhile-there’s a potential to be wrong small but right big. And, never forget, one or two good trades can make your whole year. Update: Ironically, the CNX trade eventually stopped out for an 80% gain, turning into one of the biggest trades of the year.

5. See Each Position To Its Fruition-Write﻿ ﻿That Down

Obsess ﻿﻿before ﻿﻿you get into a trade, not afterwards—stop me if you’ve heard that before. You must plan your trade and trade your plan. Micromanaging can quite often pay over the short-term but never longer-term. Assume that you’re in a position and it begins to go against you but hasn’t hit your protective stop. What should you do? Nothing. If you get out at the first signs of adversity-either at a tiny loss or when open profits begin to erode-then you will never capture a great trend. We’re playing to win. And, the only way to win is to capture a trend. Write that down too.

Micromanaging will often make you look smart-at least shorter-term. However, we’re not playing to be right or look smart. How do you think I got the name “Trend Following Moron?” We’re playing to make money, big money. And, that means following the plan by following along. We will not be right all the time-one of the few things that I can guarantee. We will be right over time. I can almost guarantee that (almost being the key word in that sentence). 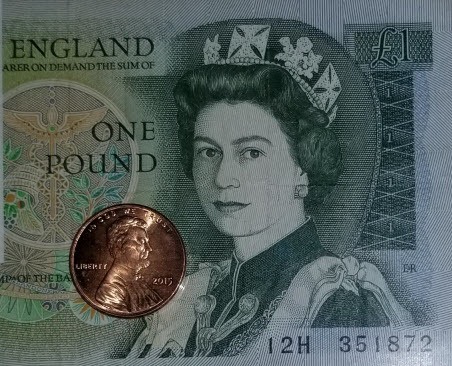 In for a penny, in for a pound. Each position must be seen to its fruition. It’s funny, in my daily Core Trading Service I outline exactly where the stop should be. Yet, when positions aren’t headed in the intended direction my inbox begins to fill with a plethora of “shouldn’t we just get out?” emails. Nope. Follow the plan Stan (and Robert, Bill, Susan,…).

Getting back to the aforementioned email, yes, there’s a chance that the shorts will stop out if the longs work and vice versa, creating a wash. Maybe this “wash” will just be temporary and the portfolio will be purged from trends that have come to an end and will keep in those that are just beginning to begin. In an ideal world, maybe both the shorts and longs could live together in harmony. Again, each trade is an independent event. Commodities can trade contra to the overall market. And, it does appear that a commodity bull market is beginning to develop. Conversely, the overall market doesn’t appear to be out of the woods just yet. So maybe, just maybe, the shorts continue to work as does our new little emerging trend friends. 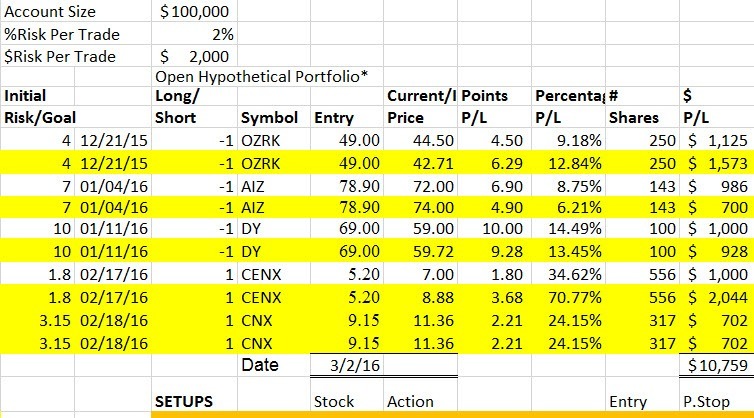 Realize that what you see is not always what there is. Conditions change. Hedging sounds great in theory, but channeling Yogi: In theory, theory and practice are the same. In practice, they are not. Ideally, put as many pieces together as possible. Make sure that a potential setup can stand on its own merits. Obsess before you get into a trade, not afterwards. In other words, don't micromanage.  These are the things that you must know when building your portfolio.