In this three-part series, I explore the only three things that you'll ever need to become a successful trader. In part one, I focus on the first thing that you'll need: A methodology. 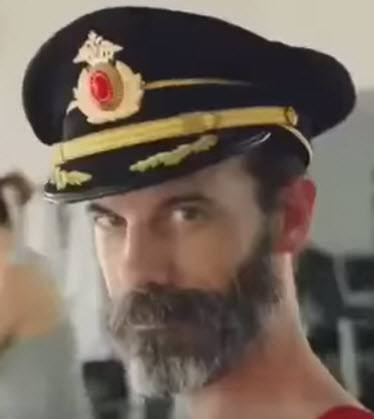 To become a successful trader, first and foremost, you‘ll need A methodology. I realize that this is a bit of a “Captain Obvious” statement, but you’d be surprised how many people just “wing it.” 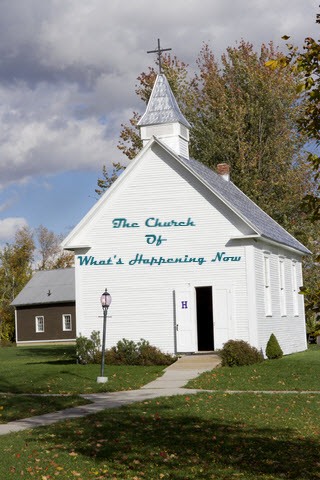 I’m not referring to novices trying to find their way by sampling methodologies. That’s understandable. I’m referring to the many that are much more experienced and should know better. Rather than stick to one viable methodology. They “Grail Hunt”-becoming a member of the "church of what’s happening now." This keeps them perpetually out of phase-often fighting the last battle.

So What's The Right Methodology? 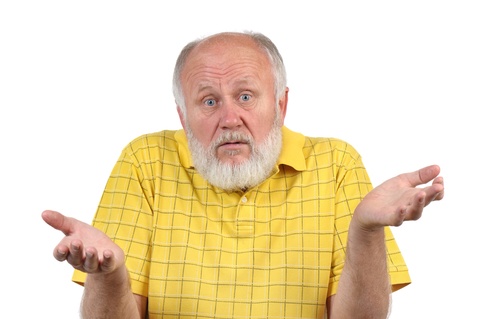 That’s for you to answer. The right methodology for you is the viable one that you will follow, provided of course, that it is conceptually correct. Since the only way to make money on a trade is to capture a trend, then trend following would qualify as being conceptually correct (with some caveats). The methodology must also have the potential to keep losses in check while still allowing for unlimited gains (the caveats). 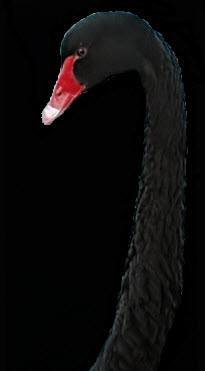 You’ll have to know the nuances. Since my parents paid for a computer science degree (thanks mom and dad!), I figured that I might as well use it. I used to wake up early and start programming trading systems. I tested everything-breakouts, trend following, mean reversion, short-term, long-term, stops, no stops, taking profits, letting them ride. You name it!  Although I preach against purely mechanical trading, all of this was not a complete exercise in futility. My biggest epiphany was that the map is not the territory. What had already happened won’t necessarily happen in the future, at least not in an exact fashion. The worst isn’t always the worst. And, just because something bad hasn’t happened, doesn’t mean it won’t. Your biggest drawdown with a purely mechanical system is always in front of you. NOTE: I once mentioned that fact to a systems designer. That turned out to be a bad idea! He began to scream at me. I suppose experience is the best teacher. Maybe if some day he stops designing systems and actually trades one he'll see. And, yes, I have that very expensive "T-shirt."

Where was I? Oh, hindsight is 20/20. My biggest takeaway was that there is no Holy Grail. Simple systems, while not perfect (hint NO systems are), can work quite well longer-term and will outperform more complex systems in real markets—not all the time, but over time. NOTE: learn more about the advantage of simple vs. complex systems by taking the free Start Course (for free) and becoming a member of DaveLandry.com: 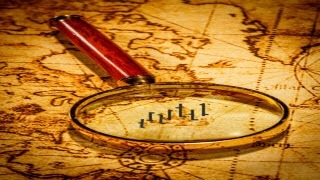 Every methodology will have its nuances. You can create a very accurate “income producing” machine that consistently makes money by taking small profits and not using stops. Unfortunately, "that’ll work until it don’t." Even if you do use stops, sooner-or-later the market will blow right past them. Provided that you don’t blow up, it will then take many months or even years to recover one tiny piece at a time. And, hopefully (a word that should never be used in this business) you don’t hit another “reset” along the way.

On the flip side, longer-term trend following will make the most amount of money longer-term. Unfortunately, drawdowns are abysmal, and you’re going to be wrong often more than 70% of the time. Provided the drawdown isn’t too steep, you could then be faced with a long recovery time. I know this through both experience and the aforementioned mechanical testing.

By accident, yesterday I stumbled across a track record on the net. He claimed to have made several hundred percent. Impressed and intrigued, I had to dig further. What does he know that I don’t? What I found was not unexpected. Like any long-term trend following system, he was only around 30% correct, had steep drawdowns, and extended flat times. In fact, he is still recovering from his latest, which started over 2 years ago. 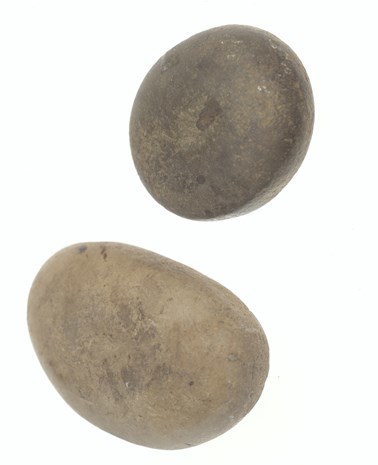 Don’t get me wrong. I am not criticizing. Kudos to him for having the stones to put it all out there-warts and all. My point is unlike the “results not typical” fine print in a diet ad, this is “results typical.” With longer-term trend following, you occasionally make a lot of money, provided of course you can survive the drawdowns both mentally and monetarily in between. This isn’t for the faint at heart.

I’d never throw stones at anyone in ﻿this ﻿business (but I do occasionally hint about those who I think are a-holes, LOL!). Seriously, I have my ass handed to me quite often. It’s not my way or the highway, but I’ve learned the hard way. There’s a two drink minimum on stories here. 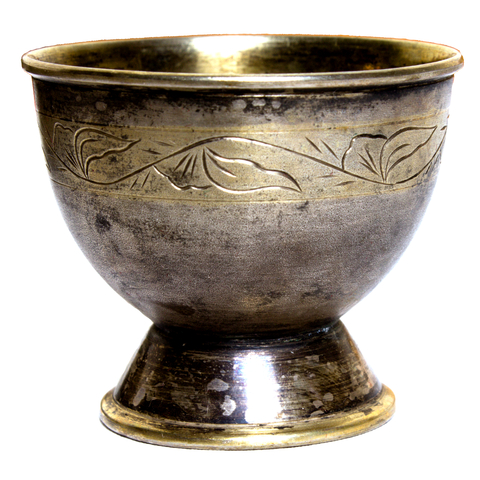 Nothing’s perfect. There is no Holy Grail. I do know that you can’t trade a methodology that has limited gains and unlimited risks (three drink minimum for stories here). And, you can’t trade a methodology that has the potential for unlimited gains and unlimited losses. Sure, you can make 10,000% provided that you don’t ever lose 100% along the way. We all read about many famous traders who have amassed fortunes. The Paul Harvey rest of the story here is that many subsequently blow up.

So, Again, What’s The Right Methodology? 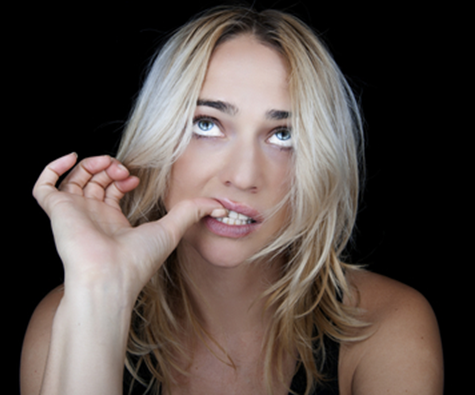 Well, again, it’s the conceptually correct one that YOU will follow. For me, its trend following but with a twist: trading for both short-term and longer-term gains. You ﻿﻿can ﻿﻿only predict the short-term with any degree of accuracy, but you can follow trends forever. Since we don’t know the future, we use protective stops, take partial profits, and trail our stop higher. If blessed with a partial profit we then stick around via a gradually loosening trailing stop just in case the longer-term trend materializes—since that’s where the real money is. This helps us to transition from the short-term trader to longer-term trend following.

The methodology seeks to play a reversion to the mean move in the direction of the trend. That’s a fancy way of saying we trade pullbacks. We seek an obvious established or emerging trend and then look to get on after a correction, should the trend begin to turn back up.

Below is an example from the open portfolio (update: this stock has since stopped out for a gain of over 79%-much better than a poke-in-the-eye!). The stock made a sharp thrust from lows, setting up a First Thrust pattern. It also formed a Bowtie during this period (see The Layman's Guide To Trading Stocks, which you can get here for free (for a limited time) and watch as many of my YouTube videos as you can stand (stealing a line from my friend Greg Morris, just don’t operate any heavy machinery afterward). 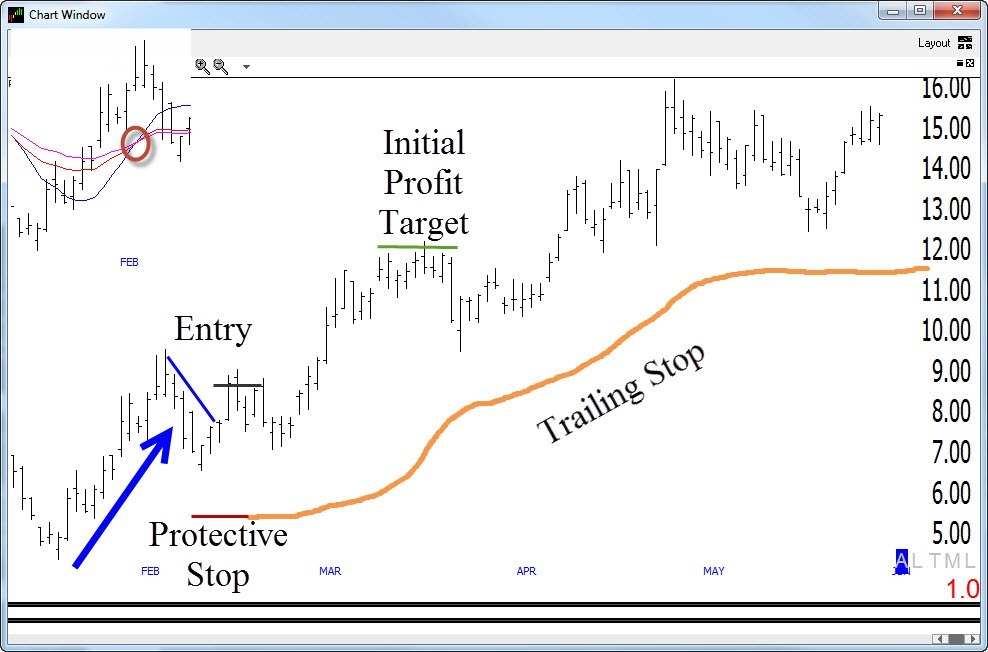 Once the entry was triggered, we put in a stop just in case. Remember, sometimes even the best-looking setups don't work. We then took partial profits, and are now trailing the stop loosely in attempt to ride out what hopefully (did I really use that word?) will become a longer-term trend. Like the little guy that solves the “Skittles leak,” that’s how “we fix it” (the dilemma between short-term and longer-term trading).

Proper stock (or other market) selection is also key. We’ll explore that and money management more in part 2. The mechanics are relatively easy. The hard part is you. And, we’ll get to that in part 3. Looking to get a jump on all this? Take the Start Course for free! Sign up below: