One of my all-time favorite stock market quotes comes from Marian McClellan, the late mother of Tom McClellan: 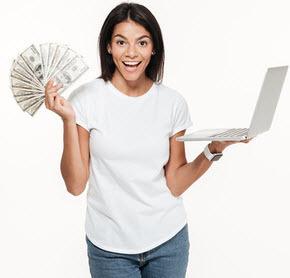 Well said, Mrs. McClellan! Markets trade on emotions, period.  A distant relative came into a little money a few weeks ago. She promptly calls me because she wants to know how to buy stocks, specifically airlines. She thinks they are a value. On the flip side, a much closer relative recently called me in a panic. Her supposed-to-be "conservative" portfolio is down hard, with some of the investments getting creamed-much worse than the market. She's nearing retirement, has some health concerns, and might not be able to return to the work force-at least in the foreseeable future. The two are microcosms of the market. One has money she wants to invest, and one needs money. As far as "more sophisticated methods," many gurus using a plethora of indicators have been calling a bottom for weeks-predict early and often, I suppose! Me? I'm still using less sophisticated methods: drawing my arrows as a good little (well, not so little, hence the nickname "Big Dave") Trend Following Moron, but I digress.

The Emotions Of The Bull And The Bear

When I woke up this morning, I began doodling a chart of the emotions of the stock market. I began to think that this can't be an "original thought," so I did some Googling. I found plenty of bull/bear cycles with euphoria at tops, extreme pessimism at the bottoms, and lots of emotions in between. Below is my simplified version. 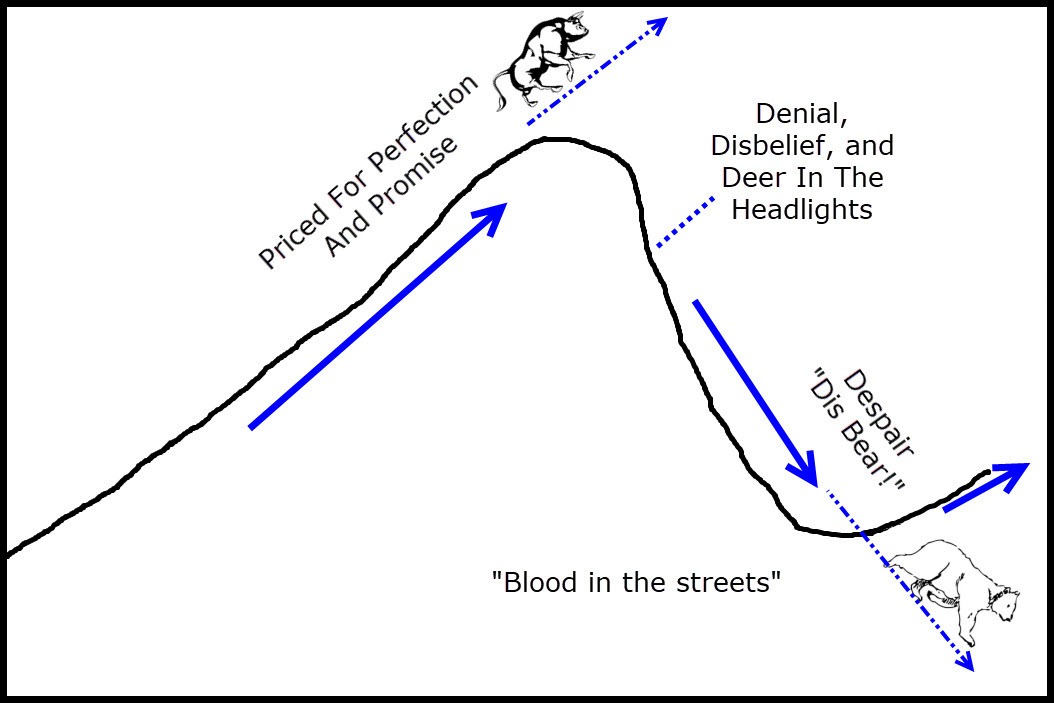 At the top, "good companies" with sound fundamentals are "priced for perfection." They must continue to meet and exceed expectations. Speculative companies who wouldn't know a fundamental if hit 'em in the ass must keep everyone "smoke'in the hope-ium." When perfection and promise fail to materialize, or better yet, the perception of  these things wanes, markets begin to tank. Initially, there's some denial, disbelief, and "deer in the headlight" action until the new reality sets in. Eventually, the market bottoms, not on great news, but usually when there's "blood in the streets." Obviously, there's a few emotions in-between, but you get the gist. I'll let those who passed freshman psychology with more than a C+ explain all those emotions.

So how do you know what emotional phase market's in?

Well, right now, it sure seems like there's blood in the streets, but you can't bet on that. Unfortunately, as I preach, it's often darkest right before it gets "more dark." My point of this column is to be cognizant of the fact that the market trades on emotions.

What you can do is follow along. At tops take partial profits and use stops. Stops will take you out of the stinkers (or soon to be stinkers!) and keep you in the winners.  We had one biotech survive for much of the slide, but eventually, it succumbed to the overall market. We now have all shorts and no longs in the portfolio. We've taken partial profits on these just in case the trend ends and staying with a piece (half) just in case the trend continues. When the tide begins to turn, we'll get knocked out of those and start looking to get long.  As I preach, let the ebb and flow control your portfolio. You can use objective measures such as Bowtie moving average order (10SMA>20EMA>30EMA) for uptrends and vice versa for downtrends, the TFM 10% system, emerging (new) trend setups (e.g., Bowties and First Thursts) and of course the Big Blue Arrow to help guide you. See the member's area for more on all this and the psychology needed to follow it.

We can't predict and trade the emotions of the market, but we can accept the fact that markets trade on emotions, period! We can follow the emotions (aka trend) and use setups and money management to guide us.