03/27/20 Bear Market Update: A Sobering Message From Italy, PLUS Technical Analysis Is Alive And Well – Dave Landry on Trading

03/27/20 Bear Market Update: A Sobering Message From Italy, PLUS Technical Analysis Is Alive And Well

I just had a very sobering conversation via Skype with a good friend/business associate from Italy. We're close. I've spent time in his home several times, and we've had him as our guest here. I'm having a hard time writing today's update based on his frank thoughts. He looked like sh*t. I was torn about whether I should mention this or not because I didn't want to fear monger. I decided to go ahead with it because I think we can learn. It's bad over there, real bad. He said it's like living in a movie-an eerie military state. His advice, first, don't go out. When you do, wear gloves and throw them away when you get home. Wear a mask. If they are in short supply, clean them with alcohol or let them sit for several days before reusing them. Wash your face. Consider goggles.

I explained to him the dilemma here of the stigma of wearing a mask in public. People will assume that you have the virus vs. being preventative. We might be forced to get over that.

He asked about my concerns. I explained that the downturn in the market weeks ago had me concerned that this was the real deal-a harbinger (e.g., I've never seen a weekly sell signal trigger before a daily). Maybe watching Pandemic and seeing a lot of the things come true didn't help either. I was somewhat relieved when I saw people beginning to take things seriously. Unfortunately, we still have a ways to go. I explained  the "laissez-faire" attitude about nearby New Orleans-the newest epicenter-and Louisiana in general. For instance, an older family member WITH A CHRONIC RESPIRATORY DISEASE went to 3 grocery stores on Tuesday because she thought the steak prices were too high. My Italian brother said that attitude will change quickly when someone close to them contracts the virus. Sobering.

Again, I don't want to fear monger. I just want to put it out there. If you're not taking this seriously, please do!

Here is the Week In Charts:

Before the Skype call, my intention today was to write about a comment criticizing technical analysis and that fundamentals are the way to go in this environment. He then went on to say that we should be averaging down! Obviously, that's more than enough to get Chief Orman wound up, but due to wanting to get this out on a timely basis, below is the "Reader's Digest:" 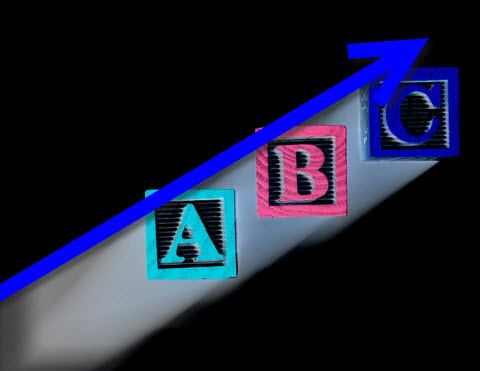 I beg to differ. PURE technical analysis uses price and only price. As mentioned often (again see the WIC above), if a market is going to lose 50% or more of its value, it's going to lose 10% first. So, when the S&P loses 10%, it's time to wake up. As I preach, if a market is at A and is going to C, and B is somewhere in-between, it's going to have to pass through B. It's not quite as easy as entering/exiting at B (although in certain instances, I do just that), but that's a good start. Wrap your head around that, and you're WELL on your way.

Pure price based (and average of price for reference-e.g., Landry Light and Bowties) technical analysis assumes the "collective" mind knows something that you don't. Now, of course, in this country, you are innocent until proven guilty, but let's assume that one of the four legislators accused of dumping stock based on inside information on Covid-19 is guilty. Further, let's assume that his broker told two people and those two people told two people. Rinse and repeat a few times, and that number becomes substantial. Those in the know leave their footprints on the charts. Price does not lie. You might not like which way the big blue arrow is pointing--and have good reasons why it should not be pointing in that direction, but what is, is. So, technical analysis is alive and well.

Seriously? See my last few videos for a lot more on this. As mentioned, a family member was placed in "conservative" fundamental funds. Some of these funds are now down over 50%. 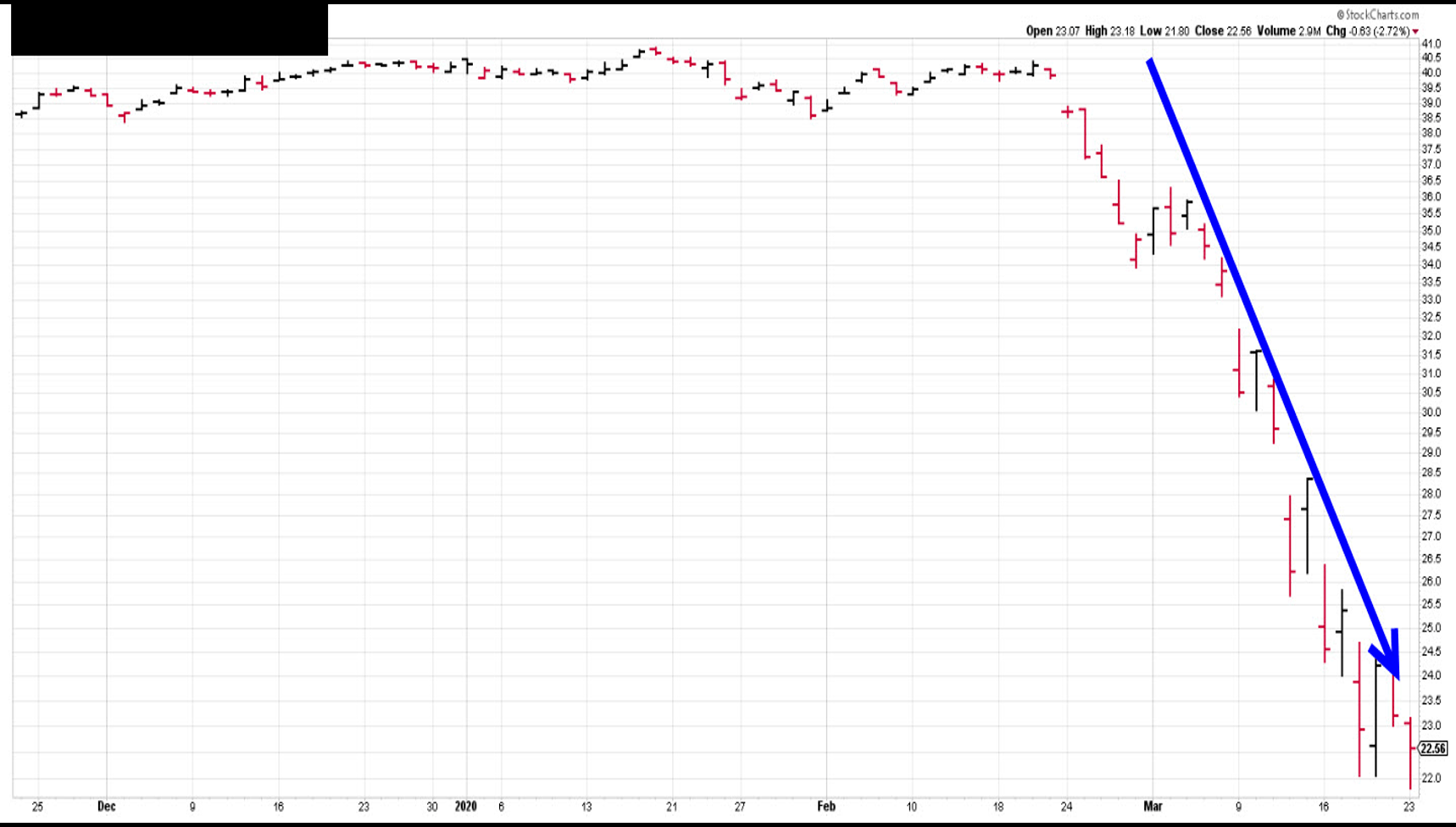 "Averaging down?"
Averaging down will work "until it don't." As long as the market comes back, and you don't run out of money, then yeah, "it works."  YES, like wars, 9/11, The Great Depression, and a plethora of other catastrophic events, the market will SURVIVE. The problem is, it can take 25 years, or more, to come back. And, as a trend follower, I believe that it's always darkest right before it gets "more dark." It pains me to write these things, but this is my third bear market. I've also studied history-as should you! 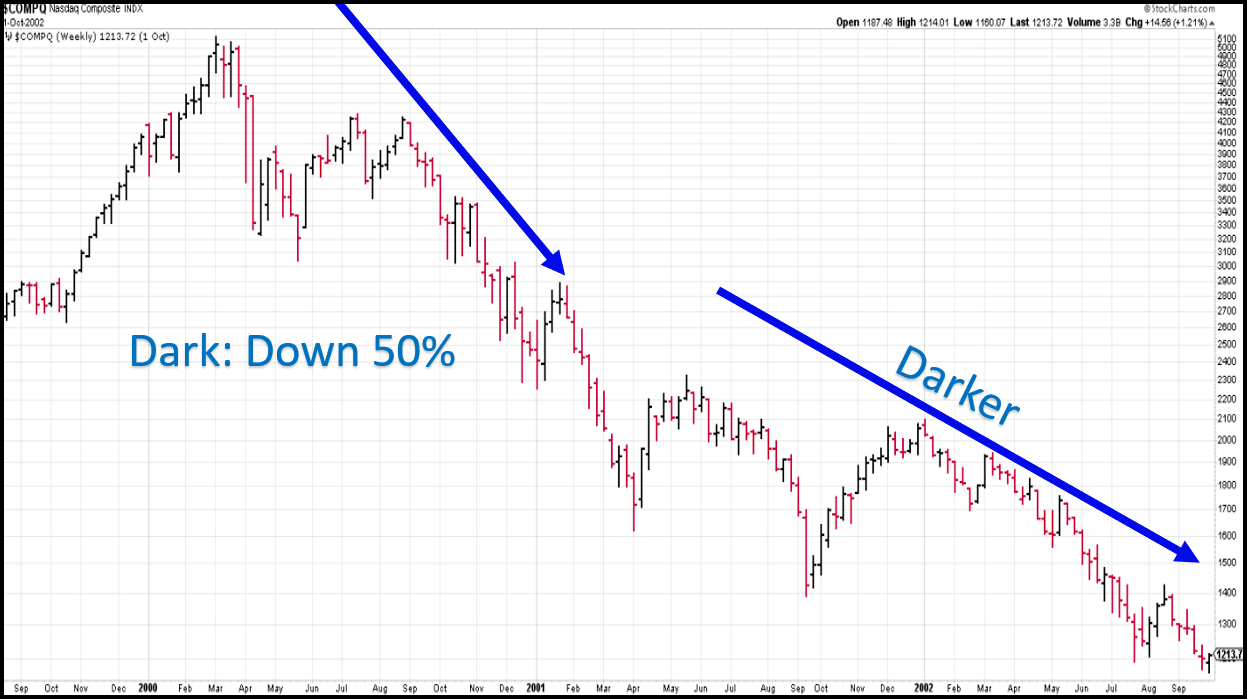 Y'all be safe and stay sane!