Here's a brief update. In a nutshell, by a variety of measurements, we are now in a "super duper" oversold condition. The taking out of Thursday's low, in spite of the government throwing everything at this market, is concerning. Now, just because it is low doesn't mean that it can't go lower-so be careful! Don't predict. Follow. Do play out likely scenarios and how you will act. Here are some details:

Jay Kaeppel, a fellow member of the American Association Of Professional Technical Analysts, wrote a interesting piece this morning comparing "apples" to "apples." He used the "old VIX" (now called VXO) to measure the amount of fear in the market. As you can see, we are approaching levels not seen since 2008.   When fear is extremely high, usually a bottom, at least a temporary one, is near. I WOULD NOT BE A HERO THOUGH! DO NOT TRY TO CATCH A FALLING KNIFE! Again, it's always darkest right before it gets "more dark."

Again, my big concern was Thursday's low-the low before the Fed shot a bazooka of liquidity into the market. To re-cap, with the Fed out of bullets, it would be ugly if that low got taken out. Well, I guess you know by now that we cut through those levels like butter.

The market is now at its lowest level since March of 2017. It has given up three years of gains in less than 5-weeks of trading-a loss of nearly 30%. This drop is unprecedented. I've never seen a market go this far, this fast. Even in 1987 it took 9-weeks to approach these levels. 1929? Yes, this move lower is even more impressive than the '29 crash. My point is that both of those "crashes" were actually much more gradual-hinting that things were going to get ugly. And, I believe, at least based on system backtesting, that these initial selloffs would have produced plenty of sell signals before the SHTF-making it a lot easier to jockey for position, or quite simply, get out of the way. 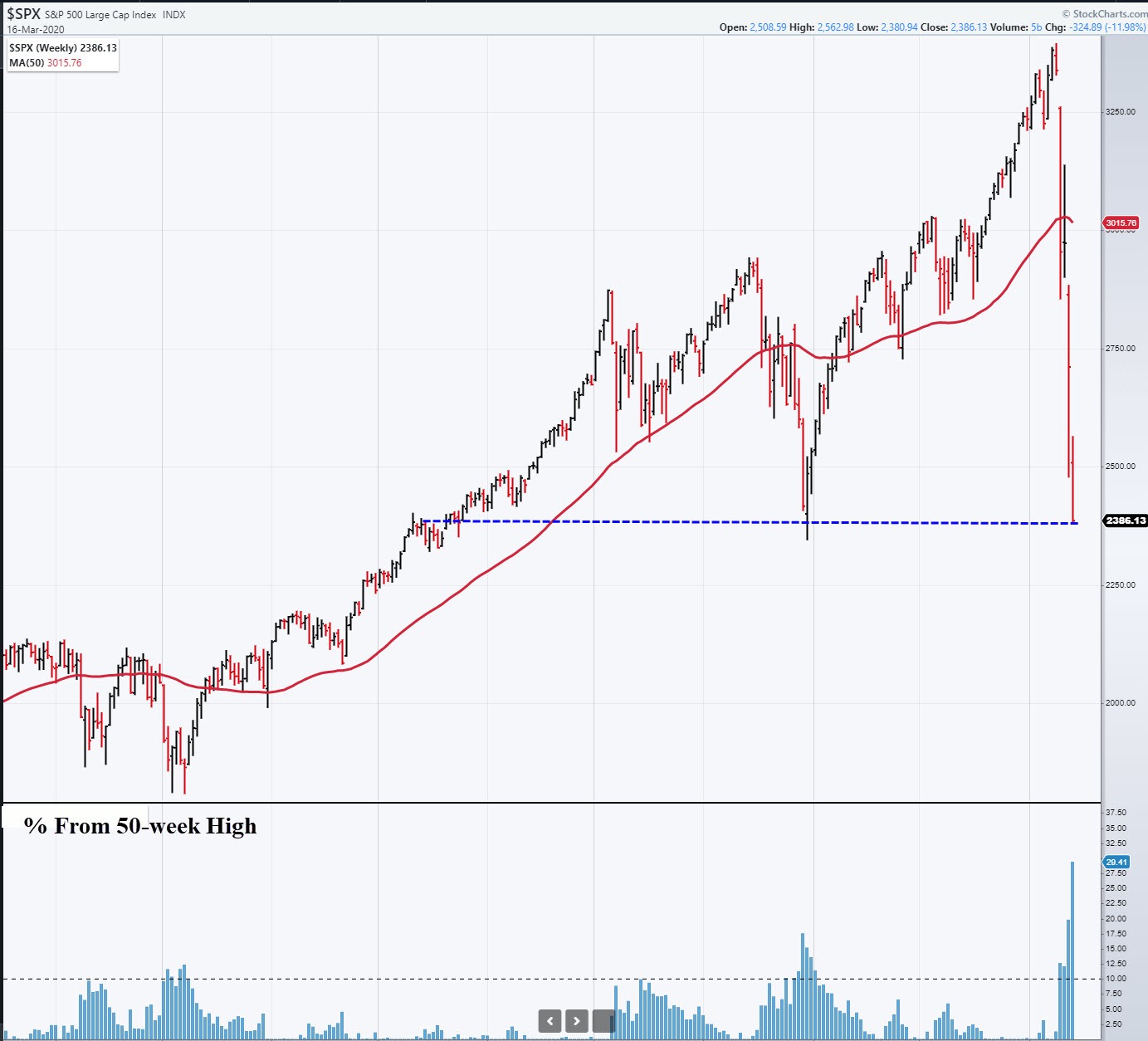 This market will have the mother-of-all bounces. That, I can guarantee. It's when and how much that has me "shaking the 8 ball-" which I used to keep on my desk for S&Gs but my kids kept "borrowing" it and I got sick of replacing it. Anyway, I digress. Referring to the chart above, we will bounce from (a). As a trend follower, I follow, I don't predict. So, I don't know if we are at "a" just yet.  Judging from the oversold nature of this market, I'd say that we're getting close. Even though I do not predict, I do think that you have to play out a likely scenario in your head.  The nature of the bounce (b) will be important. I'd love for this market to go straight back to new highs. Unfortunately, the chance of that happening, at least over the intermediate term, are Slim and none--and Slim just left town. I believe that we could retrace (b) a long ways and this market would still be in trouble. The next likely scenario after that would be a re-test of the old lows (c). I'd keep this a-b-c scenario in mind but believe in what you see and not in what you believe.  One more thought, on the "b" rally, there will be a lot of "kissing each other" in the media. Gurus will call "correction accomplished!" Don't fall for it! Hope for the best-a complete retrace back to old highs, but plan for the worse-a re-test of (c) and beyond.